The Guest House was a former top-secret storage facility at a classified location, previously affiliated with the Strategic Scientific Reserve and S.H.I.E.L.D. that became a secret research facility for Project T.A.H.I.T.I.. It was destroyed with a failsafe mechanism as Phil Coulson, John Garrett, Leo Fitz and Grant Ward tried to find a cure for a critically injured Skye.

"A heavily fortified facility located inside a mountain approximately 17 miles northwest of REDACTED the Guest House was used as munitions bunker during World War II and later upgraded for use as a REDACTED by the SSR. This facility was never formally decommissioned, although it was damaged by seismic activity in the mid-1950s and REDACTED."
―S.H.I.E.L.D. Report[src]

The Guest House was a heavily fortified facility located inside a mountain approximately 17 miles northwest of an undisclosed North American location. It was used as a munitions bunker during World War II, and later upgraded by the Strategic Scientific Reserve for classified uses. This facility was never formally decommissioned, although it was damaged by seismic activity in the mid 1950s.[1]

"So Fury's been to this place and he's the person who sanctioned the operations on Agent Coulson."
―Jemma Simmons to Leo Fitz[src]

Since the 1950s, the facility remained officially unaffiliated with S.H.I.E.L.D., but Nick Fury commissioned Project T.A.H.I.T.I., with Phil Coulson as the project's overseer, in order to develop a way to save a mortally wounded Avenger.[2]

An extraterrestrial corpse, retrieved from HYDRA by the Strategic Scientific Reserve, was taken to the Guest House[3]; experimentation revealed that its bodily fluids had numerous properties, and were drained to create various drugs, including GH.325, which had the properties of full cellular regeneration.[1] Six S.H.I.E.L.D. agents, including Rebecca Stevens and Cameron Klein, volunteered for Project T.A.H.I.T.I. in order to treat their illnesses, being brought to the facility and administered the drug and other procedures.

Coulson interviewed each of the patients, who at first showed no sign of side effects from the procedure, so after a period of observation, Coulson decided to recommend their immediate release. However, right before he could sign Stevens' release, intended to be the first, the six agents started to display various psychological side effects, most prominently the compulsion of writing a series of symbols, but also other effects like aphasia or catatonia.

Only one of them, Sebastian Derik, appeared to keep his reason, but he was also displaying the side effects, carving the symbols in his own arms, as he claimed that the pain helped him understand the meaning of the symbols. Coulson consulted the situation with Goodman and tried to shut down the program due to the degenerative effects the patients were showing. Goodman attempted to convince Coulson of the importance of the whole project, theorized that the Guest Host may have been implanting its own memories into the patients through the genetic material used in the GH.325 serum, creating a psychic schism.

Goodman proposed to erase the memories of every patient and give them new identities, in order to lead normal lives despite they could not return to active duty as S.H.I.E.L.D. agents. Coulson reluctantly agreed and allowed the procedures in order to save the patients. Each patient was submitted, under Goodman's supervision, to a robotic-assisted neural micro-surgery to implant new memories, despite the process was very traumatic for the patients.

Coulson regretted his decisions and his involvement with the whole project as he watched how the patients were kept conscious with skull caps opened as a Memory Overwriting Machine replaced their memories, in an extremely traumatic procedure.[4] Coulson recommended the project to be shut down after witnessing the effects of the treatments used there.[5]

Following his death, Coulson's body was brought to the Guest House under Fury's direct orders, to be resurrected with the different procedures that comprised Project T.A.H.I.T.I. In order to ensure his survival, Fury brought in J. Streiten, Goodman, and other specialists, submitting Coulson to memory replacement to delete his memories of the procedures and give him new memories of a recovery in a beautiful beach in Tahiti.[6]

"The Guest House is not a S.H.I.E.L.D. facility. We don't know who or what's in there. Be prepared for potential resistance."
―Phil Coulson[src]

Phil Coulson and his team intended to use some of the procedures used on Coulson to resurrect him, in order to save Skye, critically injured after being shot by Ian Quinn.

Leo Fitz and Jemma Simmons were ordered to study the Clearance Level 10 file regarding Coulson's death and recovery to learn about the actual procedures used, and choose one that could save Skye upon arriving to Bethesda, the location where Coulson was supposedly treated after his death. However, Fitz and Simmons tried to contact with Dr. J. Streiten, knowing that he was one of the responsibles of the procedures, but the crew of the trauma center in Bethesda informed them that Streiten had gone off the grid, and the personnel and facilities that appeared in the file didn't exist, at least in Bethesda.

Accessing to the archives of the Triskelion, Fitz and Simmons were able to discover the existence of the Guest House, whose initials matched those of one of the drugs used on Coulson, GH.325, and located the compound.

Coulson prepared to raid the compound if necessary with John Garrett's help, who was on the Bus to take custody of Ian Quinn. Coulson ordered Grant Ward to accompany them, and also wanted Fitz's assistance in case the medical crew or the facility were damaged, to determine the equipment Simmons would need to help Skye. Simmons and Antoine Triplett stayed in the Bus, preparing Skye to be moved to the facility to be operated inside, and Melinda May also stayed behind in case they needed to escape the area inside the Bus.

Coulson, Ward, Fitz and Garrett approached the gates of the compound, while the two security guards stationed at the compound, Alpha and Beta, were surprised to see someone coming as there were no visits scheduled for a couple of weeks. The guards tried to use the protocol, but as Coulson didn't know the countersign and it wasn't found in any of S.H.I.E.L.D.'s directive protocols, Coulson tried to reason with the people inside, letting them know that a member of his team was in dire need of medical assistance, but they obtained no response.

Ward shot at the security camera located at the gates of the compound, and Fitz started to hack the gates, quickly gaining access to the compound. Alpha and Beta prepared to defend the Guest House, praising the agents' skills as having been able to hack their way in, but as they didn't know the countersign, they couldn't let them pass.

Coulson and his men descended through an elevator, and noticed that the personnel of the compound set an ambush for them. The communications with the Bus were not functioning as they were at great depth inside the compound, and the team advanced until Fitz was able to breach a bulletproof glass door. Once they entered the room, firefight occurred between the S.H.I.E.L.D. agents and the guards. Coulson tried to negotiate again with the guards, but they didn't cease the fire, so the agents were forced to retaliate and defend themselves. Ward and Garrett were able to clear the path, killing the two guards.

Coulson and Ward followed the blood trail of one of the guards, critically injured, and Coulson asked him about the doctors stationed at the facility, but Alpha revealed that the medical staff didn't stay inside the compound, so it was empty. Alpha seemingly recognized Coulson from his days at the Guest House, and revealed the existence of a timer set in case of infiltration before dying.

Garrett located a large amount of Semtex all over the compound, and Fitz was unable to hack the panel to reopen the bulletproof doors before the explosives destroyed the whole mountain. Coulson asked Garrett and Ward to disarm the explosives or at least find a way to escape, while Coulson and Fitz went to find the GH.325 drug. While looking for it, Coulson found the room where he was operated, witnessing the machine used to rewrite his memories.

Ward and Garrett were unable to deactivate the bomb, as they hadn't enough time to locate the detonator in the entire compound, so they decided to use some Semtex to blast the door.

Coulson and Fitz entered a room marked with a Biohazard Containment sign filled with different chemical compounds, and managed to locate different vials with drugs marked with the GH letters, including the GH.325. Ward arrived to inform them that they couldn't stop the bomb. Coulson ordered Fitz and Ward to get the drug to Simmons, but he stayed behind to check a vault marked with the acronym T.A.H.I.T.I.

Inside the vault, Coulson saw a machine where the different GH. drugs were being synthesized, with a series of conduits that led to a chamber, the seeming origin of the drugs, marked with the initials G.H. As Coulson opened the chamber, he witnessed how it housed the corpse of a blue alien whose bodily fluids were being harvested to create the drugs.

Garrett was able to open the door using a small explosive taken from the walls, and told Fitz and Ward to make sure Skye received the drug, while he went to find Coulson. As Fitz approached the Bus, he communicated with the agents staying inside to take the plane off the ground to avoid the impending collapse caused by the explosion. Garrett found Coulson wandering the facility in shock, and suddenly started to shout that they couldn't give the drug to Skye. Garrett convinced Coulson to leave before the facility exploded and the whole mountain collapsed.[1]

Unbeknownst to everybody, Garrett was able to take many vials, all marked with the prefix GH, in order to continue his work and reverse-engineer the drug that resurrected Coulson.[7] 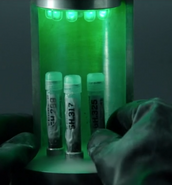 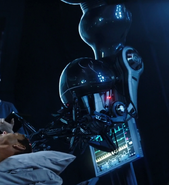 The Marvel Cinematic Universe Wiki has a collection of images and media related to Guest House.
Community content is available under CC-BY-SA unless otherwise noted.
Advertisement