Agents of S.H.I.E.L.D.
*Repairs
*End of the Beginning

"It's time to hunt, boys. Let's find us a Deathlok."
"Impressive toy."
"I prefer the term 'high-tech hardware.'"

"Any idea which way May could've taken her?"
"We'll deploy the Golden Retrievers."
― Grant Ward and Jemma Simmons[src]

Leo Fitz activated the Golden Retrievers to track Agent Melinda May when she left the bus in order to protect civilian Hannah Hutchins from the dimension-shifting Tobias Ford.[1]

"I do not have a visual. Fitz, you have a Retriever down here?"
"On their way."
― Phil Coulson and Leo Fitz[src]

When Agent Felix Blake was critically injured by Deathlok, Blake put a tracker on him which led Coulson's Team, Garrett's Team, and a raiding squad to an abandoned race track in Pensacola, Florida. There, Fitz used the Golden Retrievers as advance scouts. Through them Skye saw the cybernetic enhancements of Deathlok and ultimately found Thomas Nash.[2]

The Golden Retrievers, like their forensic evidence collection counterparts, the D.W.A.R.F.s, come in a set of eight, and are tracking drones designed for autonomous functionality while sending their retrieved information back to their operator. They launch from their case and disperse in different directions while searching for their programmed target, scanning for visual data under different wavelengths, such as infrared and ultraviolet.

When the retrievers find their target, the location information is immediately sent back to the unit's operator. 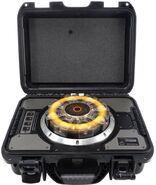 Golden Retrievers in a case 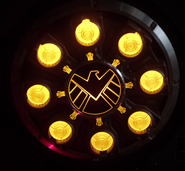 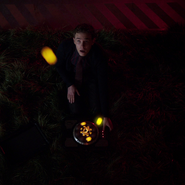 Golden Retrievers in their case