"I own this restaurant. My father owned this building."
―Jin Lin[src]

Genghis Connie's was a Chinese restaurant located in Harlem, New York City. It was owned by Connie and Jin Lin, who were also landlords to the apartments above it. The restaurant was destroyed by Cottonmouth using a rocket launcher in an attempt to kill Luke Cage, who lived in an apartment above the restaurant. 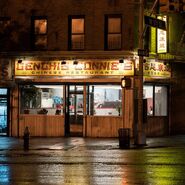 The Marvel Cinematic Universe wiki has a collection of images and media related to Genghis Connie's.
Retrieved from "https://marvelcinematicuniverse.fandom.com/wiki/Genghis_Connie%27s?oldid=1127146"
Community content is available under CC-BY-SA unless otherwise noted.