Gene Hernandez was a member of the Geosciences Research Center at Goodman University, as well as a member of PRIDE. He was the husband of Alice Hernandez and the father of Molly Hernandez. Gene was killed along with his wife by Leslie Dean.

"Alice and I didn't sign up for this!"
"Except you did. You all eagerly accepted Jonah's gifts. You reaped their enormous benefits over the years. You knew he'd ask for something in return."
―Gene Hernandez and Leslie Dean[src]

The husband of Alice Hernandez and the father of Molly Hernandez, Gene was recruited along with his wife into PRIDE, an so-called charity organization under the leadership of Jonah and Leslie Dean. Like the other members of PRIDE, Gene took part in a mysterious ritual in which the young Brooks Watten was sacrificed in order to revive Jonah. Horrified by what they had done, Gene claimed that they had never agreed to this when recruited by Jonah, only to be contradicted by Dean who replied that this was the price to pay for Jonah's gifts.[2]

Gene and his wife Alice took some rock samples on the PRIDE Construction Site where Jonah had promised that PRIDE would dig out a source of clean and renewable energy. Gene and Alice analyzed the samples in their laboratory at Goodman University, observing the unique properties of the materials, which emitted a bright light. Gene and Alice only shared their discovery with Dale and Stacey Yorkes, fearing that prominent members of PRIDE like Tina Minoru could find out about it. They also recorded a video tape meant for their daughter Molly to be given to her should they fail to uncover the truth. Gene and Alice trusted Alice's cousin Graciela Aguirre with the tape.

The Hernandezes' fears were grounded, as Leslie Dean ultimately discovered their doubts about Jonah's true intentions. As a result, while he was in her lab with his wife and his daughter, Gene figured out that his family was locked up in the lab. Gene then spotted a strange device which had been thrown on the ground. Identifying it as an explosive device, Gene tried to get to safety, but the bomb exploded, killing Gene and his wife.[1]

"I was hoping my parents weren't a part of this, but I guess they're as bad as the rest."
"No, your parents thought that they were doing something good, and when they realized they weren't, they tried to warn you."
―Molly Hernandez and Karolina Dean[src]

Gene and his wife Alice were buried during a funeral attended by the other members of PRIDE. After the ceremony, Geoffrey Wilder openly voiced his suspicions to Robert Minoru about Tina Minoru having killed the Hernandezes, something Robert strongly denied. On their own side, Dale and Stacey Yorkes feared that the killer could discover that they had spoken with Alice moments before her death.

Due to the friendship between the Hernandezes and the Yorkeses, Gene's daughter Molly, who had survived the explosion, was adopted by the Yorkeses. Years later, Molly received the video tape recorded by Gene and Alice from Graciela Aguirre, which helped the Runaways to understand what PRIDE was really up to with the dig on the PRIDE Construction Site.[1]

Gene and Alice also wrote a will before Catherine Wilder in which they bequeathed a ranch located in Yucatán.[3] 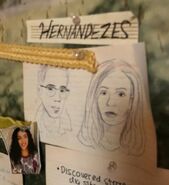