Survivor of Sakaar[1]
Destroyer of Thanos[1]

Guardians of the Multiverse (formerly)

"Gamora, survivor of Sakaar and destroyer of Thanos..."
"And one who's about to kick your moon-shaped, ugly mug."
―The Watcher and Iron Man[src]

Gamora is a Zehoberei assassin who battled on Sakaar and killed her adoptive father, Thanos, taking his armor and sword. Finding an ally in Tony Stark, she went to Nidavellir where she would have Eitri destroy the Infinity Gauntlet. She was chosen by The Watcher to join the assembled Guardians of the Multiverse to take down Ultron who had all six Infinity Stones.

At some point in time, Gamora killed her adoptive father Thanos and took his armor and sword for herself. She obtained a device called the Infinity Crusher in which she used to destroy the Infinity Stones. Later, she met Tony Stark on Sakaar and the two became friends.[1]

Chosen by the Watcher

"You, Gamora, have been chosen."
―The Watcher to Gamora[src]

Having destroyed the Stones, she and Stark travelled to Nidavellir in order to destroy the Infinity Gauntlet. There they met Eitri and were in the process of melting the Gauntlet, when the Watcher appeared before them and told Gamora she was chosen by him.

She was then transported to a bar in a dimension outside of time and space conjured up another universe's Doctor Strange. There she met people from other universes such as Peggy Carter, T'Challa, Erik Stevens, and Thor. They were then approached by the Watcher who explained the threat they faced to them and dubbed them as the Guardians of the Multiverse. Gamora then showed them the Infinity Crusher and made a plan of how they would go about in their mission.[1]

Gamora and the other Guardians were then transported through a portal to an uninhabited planet on another universe. Gamora then asked Thor if he trusted Killmonger, in which he replied he trusted all of them. However, Gamora had her suspicions about Killmonger. Strange then materialized drinks for them and proposed a toast, but as he rambled, T'Challa finished the toast. Thor then accidentally alerted Ultron to their presence and Strange quickly gave the team protection spells to defend themselves.

After T'Challa stole the Soul Stone from Ultron, Strange created another portal and Gamora, T'Challa, and Killmonger hopped through into Ultron's home universe. They were soon joined by the others and as Carter was about to hand Gamora the Stone, Natasha Romanoff arrived and snatched it from them. After realizing they were all on the same team, Ultron arrived and began a fight to take the Stone back from them. Angry that they were still alive, Ultron tried to destroy the universe, but Strange stopped him. Later in the fight, Gamora got the upper hand and used her sword to daze Ultron. However, Ultron used the Time Stone to freeze time and take the Soul Stone from her.

Strange then used his Time Stone to reverse Ultron's actions, allowing Gamora to take possession of the Stone. As Carter, T'Challa, and Strange incapacitated Ultron, she used the Infinity Crusher to destroy the Stones on Ultron's armor. However, after an explosive flash, Ultron reappeared and told them that the Stones didn't work on his universe, in which Gamora realized too late. She and the other Guardians then prepared to fight him. When Ultron deduced that Strange was the one he needed to kill, he used the Stones' power to try and remove the protection spells off of them, resulting in Gamora, T'Challa, and Thor to struggle to keep it on them. 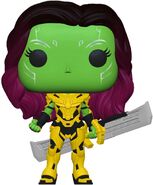