View source
watch 01:32
Wiki Targeted (Entertainment)
Do you like this video?
Play Sound

"From a realm of cold and darkness came the Frost Giants. Threatening to plunge the mortal world into a new ice age."
―Odin[src]

The Jotunn, or otherwise colloquially referred to as the Frost Giants, coined by the Asgardians, are a race of humanoid giants that live on Jotunheim, one of the Nine Realms.

"The Frost Giants tried to conquer your Earth a millennia ago, but Asgard drove them away."
"Oh. Well, thanks for that."
―Sif and Phil Coulson[src]

The Frost Giants are the race of large humanoid beings that inhabit the frozen, barren realm known as Jotunheim. They were ruled by Laufey, king of the Frost Giants, who is also Loki's true biological father.

In 965 A.D., an army of Frost Giants invaded Tønsberg, Norway, attempting to subjugate the earth and plunge it into a new ice age using the Casket of Ancient Winters. However, they were opposed by Odin and an army of Asgardians, who, after a pitched war, drove the Frost Giants back into the heart of Jotunheim and took the Casket, forcing the Frost Giants into a peace agreement.

Centuries later, during Thor's coronation ceremony, a group of three Frost Giant intruders entered Odin's Vault, attempting to take back the Casket of Ancient Winters, but were dispatched by the Destroyer. Apprehensive of Odin's lack of concern over the intrusion, Thor convinces Loki, Lady Sif, and The Warriors Three to accompany him to Jotunheim to confront Laufey. After a divisive battle, the group of Asgardians are saved by Odin, who exchanged a few heated words with Laufey before returning the travelers to Asgard. Odin then banished Thor soon after for his brash actions in this incident, which nearly restarted a war with the Frost Giants.

After Loki learned of his true origins as a Frost Giant, and took control of the throne of Asgard while Odin was in Odinsleep, he made a deal with Laufey to allow him to kill Odin and reclaim the Casket of Ancient Winters, in exchange for peace between Asgard and Jotunheim. However, as part of Loki's true plot, he double-crossed and killed Laufey and set the Bifrost Bridge to destroy Jotunheim. Despite this, Thor's timely destruction of the Bifrost ensured Jotunheim and the Frost Giants' continued survival.[1]

After the death of their leader Laufey and Loki's attack on Jotunheim, the Frost Giants were now a broken people. However, when the Bifrost Bridge was destroyed and chaos began to extend over the Nine Realms, they could sense that something had happened.[2] Around 2014, one Frost Giant was a specimen being held in the Collector's Museum on Knowhere before its destruction.[3]

The Frost Giants are a race of humanoid beings that are taller and possess a larger, more muscular body structure than both humans and Asgardians. Frost Giants typically have blue-grey skin, bright red eyes, and usually have narrow ridges on their face or in a unique pattern across their body. Some may also have narrow, bone-like crests on their head. Known members of the species are also long-lived: Loki is just over a thousand years old and still in his prime, while his father Laufey did not change much in the same period.[1]

Frost Giants' body structure is not uniform throughout their species. Each individual is seen to have variations in body structure i.e. abnormally shaped limbs and bone or muscle protrusions. The Frost Giants can manipulate ice into armor that takes advantage of these differences to form unique weapons i.e. spears for arms or battering ram heads or spiked armor.

Frost Giants are generally more adapted to, and favor conditions of extreme cold, not requiring any special clothing to protect them from the cold. They also favor forgoing the use of armor. While the Frost Giants have been shown to be able to move around freely and unhindered in the warmer climates of Asgard for an extended period of time, they however have been shown to use the Casket of Ancient Winters to permanently change the climate of an invaded territory to suit them.

Unlike other civilizations in the Nine Realms that rely on stone and metal as their primary raw materials, Frost Giants construct buildings using a combination of stone and ice and often create tools and weapons from solid ice as an extension of their ability to naturally form and manipulate ice. Although this ice is tougher than normal Earthly ice and can damage Asgardians, it can be shattered by Asgardian metals.

Frost Giants are considered to be brutish and unruly and their home realm is considered a barren wasteland by more advanced civilizations in the Nine Realms, like Asgard. 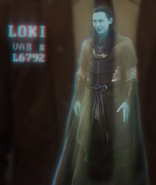 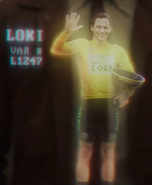 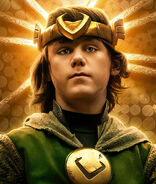 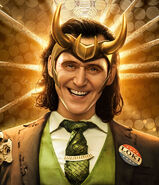 The Marvel Cinematic Universe Wiki has a collection of images and media related to Frost Giants.
Community content is available under CC-BY-SA unless otherwise noted.