The Feebles are the attempts of several countries to recreate the Iron Man Armor.

During a Senate Armed Forces Committee, Justin Hammer tried to convince the committee that other countries already have technology similar to the Iron Man armor. However, Tony Stark took over the presentation and showed video footage of failed attempts of other countries, namely North Korea and Iran. The presentation also included footage of Hammer Industries unsuccessfully attempting to recreate the armor, as the upper body part made a 180 degree turn while a person was inside the armor.[1] 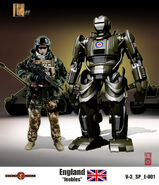 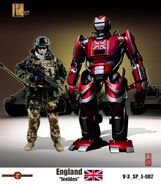 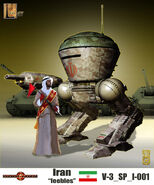 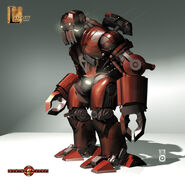 Camouflaged variant of Russia's Feeble.
Add a photo to this gallery

Retrieved from "https://marvelcinematicuniverse.fandom.com/wiki/Feebles?oldid=964610"
Community content is available under CC-BY-SA unless otherwise noted.