Marvel Cinematic Universe Wiki
Register
Don't have an account?
Sign In
Advertisement
in: Characters, What If...? Characters, Humans,
and 10 more

< Falcon
View source
watch 01:40
Boba Fett Returns - The Loop
Do you like this video?
Play Sound

"That was your friend. Sorry about that."
"I should be sad, but I'm not."
―Okoye and Winter Soldier[src]

Samuel Thomas "Sam" Wilson, also known as Falcon, was a member of the Avengers. In 2018, he was infected with the Quantum Virus which turned him into a zombie. He attacked Bucky Barnes before being killed by Okoye. Later, Falcon was somehow resurrected and summoned to another world by Doctor Strange to help confront Ultron, but was swiftly killed again when the AI destroyed the planet he was on.

Hunting Down the Survivors

In 2018, while performing duties as an Avenger, Falcon became infected by the Quantum Virus and transformed into a zombie. Falcon, along with Hawkeye, then attacked the survivors at the Grand Central Terminal. He fought against Bucky Barnes, but had no memory of their friendship. He backed Barnes into a corner to infect him, but was killed by Okoye, who vertically bisected him with her spear.[1]

Battle for the Multiverse 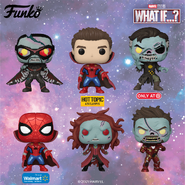