"I lied. Working with you, whoever you are, not that fun."
"I won't go down easy."
"That makes two of us."
"I can't believe I'm the only one seeing this right now."
―Phil Coulson, Agent 33 and Melinda May

Face My Enemy is the fourth episode of the second season of the television series Agents of S.H.I.E.L.D..

While on a mission to learn more about the secrets of the mysterious writing, Coulson finds himself attacked by the only person he can trust: Agent Melinda May. Meanwhile the rest of the team is trapped in an explosive situation, and it's up to Fitz to save them--but is he up to it?[1]

In Miami, Florida, the church Santa Maria de las Flores had caught fire, and the only artifact that remained untouched was a 500 year old painting with the Words of Creation inscribed on its back. A priest and a bishop decide to have a fundraiser to reconstruct the church.

Later, on South Beach, Lance Hunter kisses a woman to pick her purse and steal a ticket for Skye. Skye needed the ticket to duplicate it so that Phil Coulson and Melinda May could infiltrate the fundraiser and obtain the painting. Under the covers Charles and Heidi Martin, Coulson and May dance, in order to appear like they belonged. As they dance, they discuss their past together as S.H.I.E.L.D. field agents, whilst surveying the bodyguards and security. Coulson urges May to discuss the future, specifically what would be done in the scenario of him going insane as John Garrett did. Before May can answer, she catches sight of Glenn Talbot, and alerts Coulson. Coulson then approaches Talbot and asks civilly him not to interfere with his mission.

Meanwhile, May is flirting with Gabriel Soto, so that she and Coulson can scan his retina patterns in order to access the vault that usually housed the painting. They were oblivious to the fact that Sunil Bakshi had been impersonating Talbot with the Photostatic Veil, and had already taken the painting to his hotel room in the name of the United States Armed Forces.

After discovering that the painting is missing, Coulson and May are confronted by "Talbot." He invites them to his hotel room to inspect the painting. May follows him to his room, while Coulson returns to the Bus. While there, May finds HYDRA recruit Agent 33 in the hotel room, and the two duel. As "Talbot" distracts her, May is tasered and rendered unconscious by Agent 33, who then proceeds to use the veil to copy May's face.

Disguised as May, Agent 33 enters the Bus, plants a virus in its systems, and asks Coulson to accompany her back to "Talbot's" hotel room. Along the way, Coulson insists on discussing May's contingency plan in the event of him going insane. He tells "May" that she would be the new Director. Honored, "May" affectionately touches Coulson's hand. Before entering the room, Coulson asks "May" to go out with him for coffee after the mission. When she accepts, Coulson immediately punches her, stating "May hates coffee".

Inside the room, Bakshi plans to torture May to obtain S.H.I.E.L.D.'s secrets, but the fight between Coulson and Agent 33 distracts him long enough to allow May to escape.

Bakshi runs with the painting and Coulson gives chase, while May and "May" begin another hand-to-hand fight.

Meanwhile, on the Bus, the other agents bond over stories about their romances and love interests. Fitz is hesitant to participate.

Skye begins performing extra research into both the painting and Glenn Talbot, and the virus starts destroying the electrical systems of the plane. Fitz warns them that if the virus is allowed to continue, the Bus will explode. Fitz and Hunter work together, and are able to stop the cascade effect of the virus, saving everyone on board.

Before a HYDRA back up team can arrive, Coulson shoots Bakshi with an I.C.E.R., and takes possession of the painting. May finally wins her fight with Agent 33 by electrocuting her, fusing the Photostatic Veil to Agent 33's face.

Celebrating the successful mission, Fitz confides about Jemma Simmons with his male teammates.

Coulson and May call the real Glenn Talbot to let him know about the mission. Talbot tries to trace the call, but Coulson abruptly hangs up, tired of his company. Coulson tells May that he knew Agent 33 was an impostor when she agreed to get coffee with him.

May reveals her plan to hide Coulson in a cavern in the Australian Outback if insanity takes over, but Coulson orders her to kill him if that were to occur. May stoically nods her head.

Sometime later, Raina books a flight to Florida, seeking the painting as well. She is caught by Daniel Whitehall, who says he wants the Obelisk returned to him in forty-eight hours, or he will torture her "cruelly and personally." 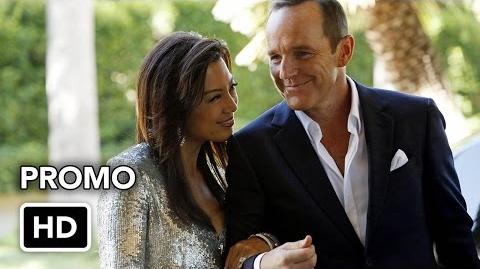 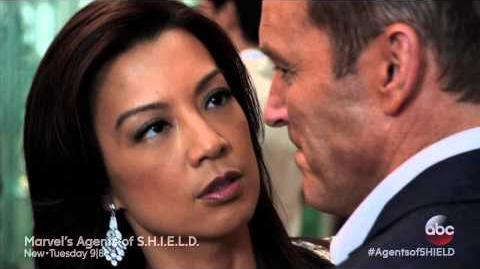 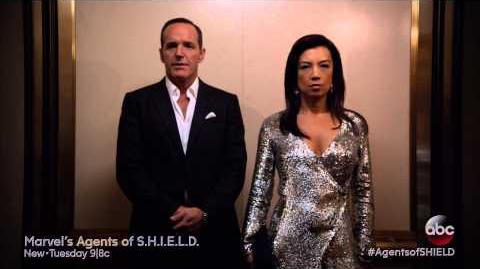 The Marvel Cinematic Universe Wiki has a collection of images and media related to Face My Enemy.