"How are we seeing this? Where's the camera?"
"It's her eye. She's the camera."
―Phil Coulson and Melinda May

Eye-Spy is the fourth episode of the first season of the television series Agents of S.H.I.E.L.D.

Agent Coulson and the S.H.I.E.L.D. team try to track down a mysterious woman who has single-handedly committed numerous high-stakes heists. But when the woman’s identity is revealed, a troubling secret stands to ruin Coulson.

A group of men, all dressed alike with grey suits, red masks, and briefcases handcuffed to their left hands enter a subway in Stockholm, Sweden. However, they pass by, and are followed by a mysterious young woman who pursues five of the men into one of the train cars.

As the masked men slowly become aware of the young woman's presence, she takes out the lights in the train and knocks out the five men in the cover of darkness. When the lights come on the five men are left on the train, while one is revealed to have had his hand ripped off and his briefcase missing. The woman opens the briefcase, which contains a small box full of diamonds before disappearing with them.

On the Bus, Grant Ward listens as Leo Fitz and Jemma Simmons outline the specifications of a new pistol version of the Night-Night Gun. Meanwhile, Phil Coulson asks Skye if she is familiar with several types of heists, telling her that he needs her to figure out how a recent thief has been exploiting security systems in a string of recent jewel robberies.

At the scene of the recent subway theft, Coulson details how the men in the red masks were all military officers, hired by one of the largest gem brokers in the world to transport a shipment of diamonds. They were all dressed identically and each given a random briefcase, only one of which had the diamonds, and took twenty five different routes. Despite this, the diamonds were still stolen. As Coulson, Melinda May, and Skye go over the crime scene, Coulson reveals that it was the work of a single thief, who committed the crime with her eyes closed, prompting Skye to believe the person to be psychic, only to be discounted by May.

Skye came up with the idea to use social media posts from people who saw the mysterious masked men to ID the thief, causing Coulson to lament how each year social media makes their jobs easier, almost like people are monitoring themselves. It doesn't take long to ID the thief as Coulson recognizes her immediately, revealing her to be Akela Amador, a close former protege of his. Coulson details how Amador was a former agent who supposedly went rogue after a bad mission and that he chose to investigate the current case based on the suspicion that it could be her; however, he chooses to hold off on informing HQ so that he can investigate for himself.

Meanwhile, Amador meets with a man in a hotel room to hand off the diamonds in exchange for a high security pass card. During the exchange she exhibits more supernatural behavior, knowing that the person had arrived before he had reached the door, and knowing that he had brought two people with him who were waiting in completely different parts of the hotel.

Coulson's team soon arrives in Zloda, Belarus in search of Amador. Coulson and Ward head into town to search for Amador while Skye, Fitz, and Simmons remain behind to search for her digitally. Coulson and Ward find an Innkeeper who knows and speaks well of Amador for alerting her that she had a cancerous growth before it became a problem, putting more mystery on Amador's abilities and intentions.

Meanwhile, Skye, Fitz, and Simmons discover an encrypted broadcast linked to Amador and, after getting a clear reception, sees a live feed of their own van, with an X-ray visual of them inside, just before a truck, driven by Amador rams the van until it overturns.

Back at The Bus, Coulson's Team is revealed to be fine, but solidify Amador's position as an enemy. Skye retraces the encrypted broadcast again where the team discovers that the source is coming from Amador's own right eye, which is, in fact, a complex prosthetic eye capable of seeing through objects whenever her eye is closed, explaining her mysterious abilities. By watching the live feed from her eye it is revealed that Amador is being controlled by an unknown second person, who sends directives and instructions that she reads from her eye, whom she also has to ask for permission for everything she does. Coulson remains adamant that the team needs to help her on their own without reporting to HQ. Coulson realizes that they can determine Amador's position in they continue to monitor the feed from her eye. May, who is distrustful of Amador and feels Coulson is too close to the case, volunteers for first watch.

May learns of Amador's current location in a hotel in Minsk from monitoring the live feed and goes to confront her alone. Amador reveals that there is a failsafe kill switch in the eye that the operator can use to kill her if she doesn't cooperate, telling May that she must kill her or be killed herself. However, after a brief fight Coulson arrives and is able to sedate Amador with the Night-Night Pistol. Amador wakes up on The Bus where Coulson reveals that they have rerouted her eye's signal to a pair of glasses being worn by Ward as he carries out the operator's directives with Skye, giving the rest of the team time to disable the failsafe. Knowing she is safe, Amador is able to reconcile with her former mentor.

The team splits up: Ward infiltrates the target building with Skye's help to fool Amador's handler; Fitz and Simmons perform an operation to remove Amador's kill switch; and Coulson leaves to confront the handler himself with May guiding him.

Ward makes it into the facility and observes an image of a mysterious chalk drawing, but accidentally sets off an alarm on the way out. Fitz and Simmons manage to remove the kill switch just as Ward accidentally blows his cover to the operator in the confusion. Despite the setbacks, Ward is able to exit the building and escape with Skye.

Meanwhile, with May's assistance, Coulson tracks down Amador's operator only to discover that he too was being controlled by a third party when a kill switch in a similar eye implant kills him.

With the case resolved for now, Coulson discusses the loose ends with Amador before saying his goodbyes and handing her over to S.H.I.E.L.D. authorities, promising her a fair trial, but Amador is simply happy to finally be free. As she leaves, Amador asks May what's happened to Coulson, noting a difference in him. May recounts how he almost died before the Battle of New York, but Amador mentions that something had been done to him before dropping the subject, leaving May confused.

Later, Coulson joins Skye in the S.H.I.E.L.D. SUV, where she had been taking "me time". She makes room for her boss, and the two discuss Amador, and the protection that S.H.I.E.L.D. supplies, ending with Coulson commenting on how peaceful is good. 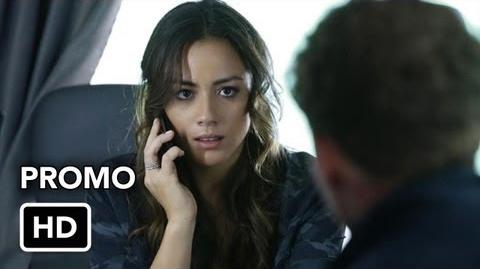 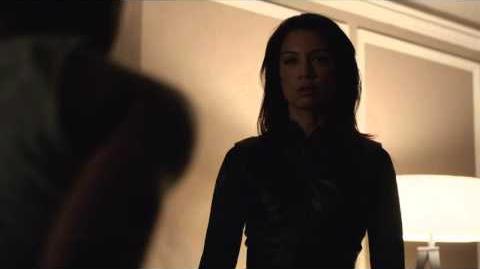 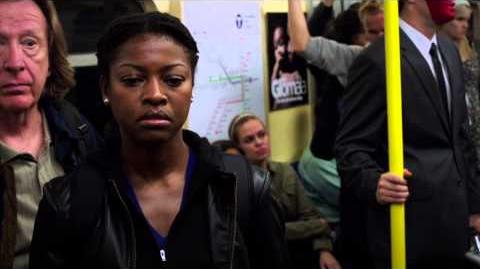 The Marvel Cinematic Universe Wiki has a collection of images and media related to Eye-Spy.