"Don't try and be a hero. You know that's not you."
―Eddy Costa to Jessica Jones[src]

"There's a few of us here who remember what Kilgrave did in this precinct. I had nightmares of holding my own gun to my head. The feeling of my finger on the trigger."
"I recommend hypnosis."
"I didn't need that, because, uh, the dreams stopped the day you took that asshole out."
―Eddy Costa and Jessica Jones[src]

Eddy Costa was working at the office when Kilgrave took control of everyone in it. He was forced to place his pistol next to his head, with his finger on the trigger. He sat this way until Kilgrave left, finally allowing him to put his pistol away. This encounter with Kilgrave gave him nightmares, which continued until the moment Jessica Jones murdered Kilgrave.[1]

"Victim's name was Robert Coleman. Ever heard of him?"
"He came to me. He wanted to hire me, but I was booked."
"How shitty must you feel? Guy comes to you for help and winds up dead around the corner from you."
―Eddy Costa and Jessica Jones[src]

Detective Eddy Costa and his partner, Detective Ruth Sunday, were assigned to investigate the death of Robert Coleman. They arrived to question Jessica Jones at her apartment, and subsequently talked to the building's new superintendent Oscar Arocho.[2]

"Jessica Jones, you're under arrest for the murder of Nicholas Spanos."
―Eddy Costa to Jessica Jones[src]

"It's over. Just get out of the way, let us do our job."
"If they find her, they'll... they'll shoot to kill, won't they?"
"You're damn right they will. She took out one of our own."
―Eddy Costa and Jessica Jones[src]

"You did the only thing you could, Jones. There was no other way. You did the right thing."
―Eddy Costa to Jessica Jones[src]

"Hey, listen, just in case you come up with anything else for us–"
"One show-and-tell doesn't make us partners."
"You want to go it alone, that's your call. But there's a lot of people on the force that wanna see you locked up."
"And you're the only white hat in a sea of black hats."
"Not the only one."
―Eddy Costa and Jessica Jones[src]

Eddy Costa was a wise and honorable man, as Jessica Jones considered the only "white hat in a sea of black hats." After being brainwashed by Kilgrave, he suffered from nightmares of losing his free will until Jones killed him. Afterward, Costa believed that Jessica was a good person, and believed that he owed a debt since she had ridden the world of Kilgrave. Despite this, Costa was still lawful, as he and the police went on a hunt for Alisa Jones due to her killing his partner Ruth Sunday. Losing Sunday had a great effect on him, as he refused to listen to Jessica on the police going to kill her mother, stating that she killed "one of their own".

"You could stop. Maybe leave the heroics to, uh, trained professionals who are committed to the rule of law and subject to oversight."
―Eddy Costa to Jessica Jones[src] 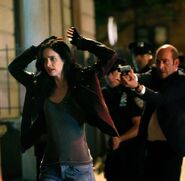 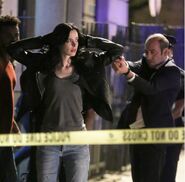 Retrieved from "https://marvelcinematicuniverse.fandom.com/wiki/Eddy_Costa?oldid=1018717"
Community content is available under CC-BY-SA unless otherwise noted.