Marvel Cinematic Universe Wiki
Register
Don't have an account?
Sign In
Advertisement
in: Articles to be rewritten, Articles to be expanded, Items,
and 13 more

WandaVision (footage)
The Falcon and The Winter Soldier
What If...?
Ms. Marvel (sign)

"Those wings carbon fiber?"
"Is this stuff coming out of you?"
"That would explain the rigidity flexibility ratio which, gotta say, that's awesome."

The EXO-7 Falcon is a propulsion wingsuit created for the Air National Guard and used by former paratroopers Sam Wilson and Riley. In 2014, Steve Rogers and Natasha Romanoff stole one for Wilson to use in order to prevent HYDRA from executing Project Insight, although it was destroyed by Winter Soldier. The following year, Wilson received a new version when he became an official member of the Avengers. This version was turned to dust, along with Wilson, as a result of Thanos' Snap, but was restored five years later along with Wilson in the Blip.

Following the Battle of Earth, Wilson was given an upgraded version. However, it was destroyed months later in 2024 by John Walker, with Wilson giving the broken wings to Joaquín Torres. Days later, a vibranium version of the EXO-7 Falcon was created by the Wakandan Design Group and given to Wilson, who used it when he became Captain America.

"I heard they couldn't bring in the choppers because of the RPGs. What did you use? A stealth chute?"
"No. These."
―Natasha Romanoff and Sam Wilson[src]

Created sometime prior to 2014, at least two EXO-7's were built and deployed in Afghanistan. The suits were used by the Air National Guard and were given to Sam Wilson and Riley to use on their para rescue missions, including one mission to extract Khalid Khandil in Bakhmala, since helicopters could not be used due to enemy RPGs. One of the flight suits was likely destroyed when Riley was shot down, and the remaining one was locked away by the U.S. Military at Fort Meade once Wilson had retired from the military.[2]

"Where can we get our hands on one of these things?"
"The last one is at Fort Meade, behind three guarded gates and a twelve-inch steel wall."
"Shouldn't be a problem."

In 2014, Captain America and Black Widow had appropriated the EXO-7 Falcon in order for it to be used by Sam Wilson during their war against HYDRA. Falcon initially used it to help with the capture and questioning of Jasper Sitwell. When Black Widow kicked Sitwell off a rooftop to scare him, Falcon flew down and caught him in mid air, before flying back onto the roof and dropping Sitwell at their feet, causing Sitwell to confess everything he knew about Alexander Pierce's plans with Arnim Zola and Project Insight.

When their team was attacked by the Winter Soldier, Falcon reclaimed his wings and flew down to assist, knocking Winter Soldier off his feet as he attempted to shoot Captain America. However, Falcon and his allies were then surrounded by members of STRIKE, led by Brock Rumlow, who took them into custody, confiscating Falcon's wings. Before they could be executed, Falcon and his allies were saved by Maria Hill, who also rescued Falcon's wings.[2]

Battle at the Triskelion

With a mission to hack into HYDRA's Helicarriers, Falcon flew onboard the ships, battling Quinjets until, Falcon's EXO-7 was destroyed when the Winter Soldier attacked him and tore one of the wings off, before kicking Falcon off the Helicarrier.[2]

In 2015, Wilson joined the Avengers and received a new version of the EXO-7 Falcon created by Tony Stark. Similar in terms of its function, it contained upgrades such as weapons, armor plating, communications, sensors, and a red trim for design. Wilson used his pack to arrive at the Avengers Compound to join the second incarnation of the Avengers team led by Captain America.[3]

Duel at the Avengers Compound

Following a perimeter breach at the Avengers Compound, Falcon intercepted Ant-Man when he had infiltrated their facility, as he used his Combat Goggles to see Ant-Man, forcing him into return to his normal size. However, during the fight, where Falcon then flew above the ground and used his twin guns to try and stop the intruder, Ant-Man was able to shrink down and rewire the wing's controls, making Falcon lose full control of the EXO-7 Falcon.[4]

Attack on the IFID Headquarters

In 2016, Falcon used the EXO-7 against Crossbones and all his mercenaries during Attack on the IFID Headquarters. Watching from high on top of a nearby building, Falcon had used Redwing to locate Crossbones as the attack had begun, before flying into the battle as he picked up Captain America and dropped him in the battle. Having used the speed of the EXO-7 to take out several mercenaries, Falcon used the wings as shields to protect himself and Wanda Maximoff from enemy gunfire, before firing off several missiles.

As Crossbones and his mercenaries had escaped the facility with the biological weapon, Falcon chased them all into the streets of Lagos, before using his Combat Goggles to find them in those crowds. Flying through the civilians, Falcon found one of the mercenaries and slammed into him at full speed, knocking him out, before he learned that Black Widow was in danger, while Falcon sent Redwing to assist her, managing to take the biological weapon to safety as a result.[1]

"It's the government's property. Wings, too."
"That's cold."
―Natasha Romanoff and Sam Wilson[src]

Wilson used it during the Capture of Winter Soldier. Therefore, the jetpack was confiscated by the Joint Counter Terrorist Centre. Later, he escaped from the facility in Berlin, and his jetpack was recovered by Sharon Carter, who returned it to him. He used it later during the Clash of the Avengers.[1]

Clash of the Avengers

"Target his thrusters, turn him into a glider."
―War Machine to Vision[src]

The group all suited up in their own uniforms and made their way to the Leipzig-Halle Airport where they would depart to Siberia on a Quinjet to stop Helmut Zemo's plan. While Captain America allowed himself to be cornered and disarmed by Iron Man's team of heroes, Falcon took his position and scanned the airport. Falcon found the Quinjet that Iron Man's team had arrived with in Hangar 5 using Redwing's lenses and alerted Captain America.

Falcon and Winter Soldier then made their way towards the hangar, until Spider-Man followed them. Falcon fought Spider-Man in the air, before Spider-Man managed to bring Falcon to the floor by webbing his flight-pack. With Falcon webbed up to a handrail Spider-Man asked if his wings were made from carbon fiber. Spider-Man lunged towards Falcon, only for the kick to be eased by Barnes, Falcon then controlled Redwing to take Spider-Man outside of the terminal.

Falcon and his team ran towards the Quinjet, only to be stopped by Vision, who implored the team to surrender. They refused and the two sides ran at each other, with Falcon tackling War Machine in the air. When Vision tried to attack Falcon, he was stopped by an electric arrow fired from Hawkeye, helping Falcon to fly away. Falcon was chased down by Iron Man and War Machine who tried knock him out of the sky, as Falcon asked Hawkeye for aid.

Knowing they could not all win, Falcon, chased by War Machine, suggested a diversion, as Ant-Man grew to an enormous size and caught War Machine behind Falcon. As Falcon was chased by Iron Man, he disengaged his wings to perform a freefall and launched Redwing, which flew directly at Iron Man. As Captain America and Winter Soldier escaped, Iron Man and War Machine chased them. Falcon flew after them but as he also avoided Vision's laser beam.

The beam, however, hit War Machine's Arc Reactor, disabling the suit. Rhodes fell helplessly thousands of feet onto the ground, despite Falcon and Iron Man's efforts to save him, and was left partially paralyzed by the impact. Falcon was then subsequently neutralized by Iron Man and taken into custody aboard the Raft, his equipment being confiscated. When Steve Rogers later returned to free the imprisoned Avengers, the EXO-7 Falcon was returned.[1]

When Wanda Maximoff and Vision are attacked and cornered by Black Order members Corvus Glaive and Proxima Midnight at a train station in Edinburgh, Falcon swooped in and manages to kick Midnight away from the two Avengers as Steve Rogers and Black Widow helped him in overpowering them, prompting the Black Order to retreat.[5]

"Alright, back up, Sam. You're gonna get your wings singed."
―War Machine to Falcon[src]

Shortly after the Avengers' arrival in Wakanda, the Black Order set foot on the borders of the African nation with their massive horde of Outriders. The kingdom and the Avengers prepared to counter the attack as Falcon and War Machine soared around the battlefield. When the Outriders start to pour through the barrier, Falon provided air support and began to fire down the Outriders before using the same tactic on the Threshers.

Once the Outriders were defeated, Falcon joined the others into the forest to protect Vision and witnessed Thanos' arrival. Falcon unleashed all the firepower he had, before the wings of the EXO-7 Falcon were rendered useless by the Space Stone, and he was knocked out. When Thanos collected all of the Infinity Stones and snapped his fingers, Wilson and the EXO-7 Falcon disintegrated.[5]

"On your left."
―Falcon to Captain America[src]

However, five years later, the EXO-7 Falcon was restored along with Wilson after Bruce Banner used the Nano Gauntlet to resurrect the victims of the Snap. Wilson then used the EXO-7 Falcon in the Battle of Earth.[6]

"You guys fly low, drop me off, I fly up to intercept. No treaties violated."
―Falcon to Hill[src]

In 2024, the EXO-7 Falcon suit was upgraded and was used by Falcon while performing contract work for the United States Air Force. Wilson used them during the Rescue of Captain Vassant with great ability. He was able to use the wings to fly faster and was able to combat the LAF and Georges Batroc in the air throughout the canyons.[7]

Chase of the Flag Smashers

Falcon again used the EXO-7 Falcon when fighting against the Flag Smashers on top of trucks in Munich, Germany. Falcon used the wings of the EXO-7 Falcon to successfully catch Bucky Barnes, who was clinging to the bottom of the truck, and fly them into a field.

Ambush at the Resettlement Camp

The EXO-7 Falcon was used by Falcon in Riga, Latvia when he fought against Karli Morgenthau and the Flag Smashers.[8]

Falcon used the EXO-7 Falcon during his fight with John Walker, but Walker was able to pin Falcon down to the ground and detach the wings from the suit. However, the EXO-7 Falcon's thrusters remained intact and were used to pry the shield from Walker's grasp.[9]

Given to Joaquin Torres

"Wait, yo, you forgot the wings."
"Keep 'em."
―Joaquín Torres and Sam Wilson[src]

After the wings had been destroyed by John Walker, Sam Wilson returned to the Latvian GRC Resettlement Camp with the EXO-7 Falcon. Since Wilson had reclaimed the shield, he handed the EXO-7 Falcon over to Joaquin Torres.[9]

Rescue of the GRC Members

"I wonder how much I can get for your new bird costume."
―Georges Batroc to Sam Wilson[src] 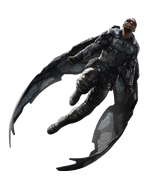 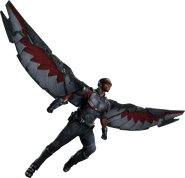 The Upgraded Suit, featured in The Falcon and The Winter Soldier

The Marvel Cinematic Universe Wiki has a collection of images and media related to EXO-7 Falcon.