"He took out the Dogs of Hell, too. Blew up their clubhouse. They charged him with 37 counts of murder."
―Stewart Finney to Wilson Fisk[src]

The Dogs of Hell are a biker gang with chapters in Nevada and New York.

"You have men. You are their leader?"
"Last time I checked, yeah."
"You and your men now serve me."

When the Asgardian Lorelei and her thrall Jimmy Mackenzie came to Rosie's Desert Oasis, Lorelei was approached by the Dogs of Hell leader, Rooster. Impressed that he was a leader of men, Lorelei enthralled Rooster and the Dogs of Hell witnessed her superior strength as she murdered Mackenzie. The Dogs of Hell then proceeded to steal for Lorelei in an attempt to please her.

They robbed a jewelry store and a gun shop within 48 hours of Lorelei's arrival, which caused S.H.I.E.L.D. and Sif to discover their existence. The Dogs of Hell witnessed Rooster kill his wife, Rosie to appease Lorelei. Coulson's Team arrived at Rosie's Desert Oasis and a firefight began, causing the Dogs of Hell to defend Lorelei against Sif. As Sif fought six different members and incapacitated them, Rooster was knocked unconscious by Agent Grant Ward.[1]

In 2015, a mysterious drug lord, known as the Blacksmith, organized a big drug deal in Central Park, where Frank Castle was with his wife and children. Along with Kitchen Irish and Mexican Cartel, the Dogs of Hell met at the Park. The Blacksmith did not show up to the meeting, resulting in the gangs getting rattled and opening fire on each other. In the crossfire, multiple members of the Dogs of Hell, an undercover cop, and Frank Castle's family were killed.[2]

Targeted by the Punisher

"Smitty was on a run, I-90 with four brothers, transporting a big score. They were hit by a goddamn army. Their whole crew was cut to pieces. Left there like roadkill."
―Tattooed Doorman to Foggy Nelson[src]

The Dogs of Hell was one of three mobs, alongside the Kitchen Irish and the Mexican Cartel, targeted by the Punisher, to get revenge for the death of his family. He tracked Smitty and four other bikers while they were transporting loot on Interstate 90, where he ambushed and killed them.

After the Massacre at the Burren Club, Matt Murdock heard an attack on the Dogs of Hell from police officers. Foggy Nelson decided to speak with his friend Smitty, a member of the Dogs of Hell. Nelson approached the entrance to the Dogs of Hell headquarters, asking to be let inside to speak to Smitty. At the mention of Smitty's name, the men guarding the entrance pat him down and let him inside. He was brought to Jimmy the Bear, the leader of the New York division of the Dogs of Hell. When Nelson said that he knew Smitty from the Catholic school they attended when they were kids, Jimmy threatened him and told Leon to take him outside, where Leon told Foggy that his friend was killed when an army attacked his crew. He then told Nelson to leave and never come back.[3]

While on of their raid, members of the Dogs of Hell delivered a Redfield Electronics's truck to their warehouse, though the driver ended up dead. They decided to clean and disassemble the truck. At this moment, the Punisher attacked the warehouse and massacred nearly all the members inside the base, taking control of one of the trucks inside to be used as a part of his plan. The Punisher strapped the last remaining member of the Dogs of Hell in the warehouse to the driver's seat of the truck, and made him drive to the meeting point.[4]

Later, the Punisher took aim at the Dogs of Hell's Club, and blew up one of their motorcycles, as they charged up to the rooftop he and Daredevil were on. After the Punisher was knocked unconscious, Daredevil attempted to escape with his incapacitated body. The pair nearly got away, until the gang threatened to harm an elderly citizen in the building. Using an empty gun, taped to his hand by the Punisher, and a chain that was previously wrapped around him, Daredevil engaged the Dogs of Hell in a brutal and grueling fight that led all the way down a stairwell. Daredevil ultimately defeated them all, while Punisher managed to escape.[5]

"The Dogs of Hell will be using Rand trucks to deliver to the south."
―Sophia to Madame Gao[src]

The Dogs of Hell were hired by Madame Gao's faction of The Hand to distribute Steel Serpent in New York City. The bikers accepted the offer and organized a delivery of the heroin to the south part of the city using Rand Enterprises vehicles.[6]

As part of his mission of exacting revenge, the Punisher continued to hunt down and kill the remaining members of the New York division of the Dogs of Hell. He chased the last two to rural Alabama, where they tried to escape on their bikes. The Punisher pursued them in a beat-up van, trading gunfire with his targets. The Punisher's shotgun blast disabled both of the bikes, leaving the Dogs lying in the road. Turning the van around, the Punisher then proceeded to run them both over, killing them.[7] 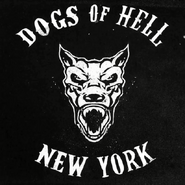