Marvel Cinematic Universe Wiki
Register
Don't have an account?
Sign In
Advertisement
in: Characters, Doctor Strange in the Multiverse of Madness Characters, Humans,
and 12 more
English

< Doctor Strange
View source
watch 01:36
We're Getting Mutants in the MCU - The Loop
Do you like this video?
Play Sound

Masters of the Mystic Arts
Illuminati

"From our experience, the greatest danger to the Multiverse, it turns out, is Doctor Strange."
―Mister Fantastic to Doctor Strange[src]

Doctor Stephen Vincent Strange, M.D., Ph.D. was the Sorcerer Supreme and the founder of the Illuminati on Earth-838. In 2018, during Thanos' crusade against the universe in his quest to gather the Infinity Stones, Strange used the Darkhold to search through the Multiverse for a possible solution to the conflict via dreamwalking. However, this caused an incursion between two realities, destroying one of them. Following Thanos' defeat, Strange was sentenced to death by the Illuminati and executed by Black Bolt.

Strange met a woman named Christine Palmer and began to fall in love with her. Strange and Palmer eventually broke up because Strange always had to be the one to "hold the knife" and be the one to fix everything. However, in 2012, Strange was involved in an accident that severely damaged his hands. This led to Strange training to become a Master of the Mystic Arts, and he was later awarded the title of Sorcerer Supreme and also Master of the New York Sanctum. He also befriended Karl Mordo.[1]

"Your alternate self created the Illuminati to make difficult decisions that no one else could."
―Captain Carter to Stephen Strange[src]

In 2017, Strange founded a team of Earth's greatest protectors, including Professor X, a Mutant with telepathic abilities; Mister Fantastic, the leader of the Fantastic Four; Captain Carter, the First Avenger; Captain Marvel, a powerful cosmic being; and Black Bolt, the Inhuman King of Attilan. Strange designed the team to protect their reality from major universal threats by making the choices too difficult for others to make.[1]

"One night you called us all together, confessed that you had been dreamwalking, and in your words, things have gotten out of hand. You never told us the details of what had happened, only that you had inadvertently triggered an Incursion."
―Mister Fantastic to Doctor Strange[src]

In 2018, Thanos launched a crusade against the universe in his quest to gather the Infinity Stones. The entire Illuminati banded together to stop Thanos, except for Doctor Strange, who used the Darkhold to search through the Multiverse for a possible solution to the conflict via dreamwalking. However, this caused an incursion between two realities, destroying one of them.[1]

After Strange's execution, Karl Mordo was chosen to replace him as both Sorcerer Supreme and as a member of the Illuminati. Additionally, the Illuminati made a hard decision, and told the world that Strange sacrificed himself to defeat Thanos, and so the world mourned Doctor Strange, building a statue of him right outside the New York Sanctum.[1]

"While the rest of us banded together to try to stop Thanos, Stephen, as always, chose to go it alone."
―Professor X to Doctor Strange[src]

Strange wanted nothing more than to protect the world from threats and fight for the greater good. He would give up anything in order to achieve his goals, as shown when he caused an Incursion between realities while dreamwalking through the Multiverse in an attempt to stop Thanos during the Infinity War. However, Strange recognized when he made faults or mistakes, just like when he confessed to the Illuminati that he had accidentally destroyed a universe. Strange was also willing to take responsibility for his actions, since he agreed with the Illuminati's decision to execute him.

"He turned to the Darkhold. Began dreamwalking. In hopes that our salvation might lie in the Multiverse."
―Baron Mordo[src]

"So, I have you to thank for these then."
"Yes, I developed those using the Sands of Nisanti. One of 838-Stephen's magical relics."
―Doctor Strange and Christine Palmer[src] 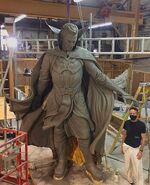