"I created the Deviants, Sersi, for the same purpose I created you. Every Celestial host planet has its own predators. I first sent the Deviants to exterminate them so intelligent life can grow, but there was a flaw in the design. They evolved, became predators themselves."
―Arishem the Judge[src]

The Deviants are a monstrous and apex race of near-immortal beings genetically engineered by the Celestials to ensure the development of sapient life on the planets seeded with nascent Celestials by wiping out the planet's apex predators. However, due to their biological nature, the Deviants evolved and began to hunt and wipe out all life. To protect the sapient life required for the Emergence of a new Celestial, Arishem then created the synthetic Eternals and sent them to eliminate the Deviants.

The Deviants were a race of genetically engineered organic beings, created by the Celestial Arishem the Judge in order to assist in the process of Celestial seeding. Arishem created the Deviant race with an intended role; to wipe out the apex predators of seeded worlds and thus allow sentient life to evolve. For a time, the Deviants succeeded in this role, killing of the predators of many worlds, starting with the extinction of the dinosaurs.

However, the Deviants, due to their biological nature, were not subject to full control from the Celestials, and began to rebel. By killing the predators of worlds, they were able to take the form of their slain prey, and soon took on the role of apex predators themselves. The Deviants began to ravage the seeded worlds they were intended to protect, wiping out all life on them.

Having lost control of the Deviants, who were now running rampant across the galaxy, Arishem created a new race to combat them, synthetic rather than organic, and named them Eternals. It became the role of the Eternals to exterminate the Deviants and protect seeded worlds, and Eternals soon hunted Deviants across the galaxy.[2]

Multiple Deviants came to the planet Earth, seeded with the Celestial Tiamut, prior to 5000 B.C, and became feared by the local human population. A group of Deviants were terrorising a group of primative humans when a team of Eternals arrived aboard their ship, the Domo, and fought the Deviants, killing all of them.

A group of Deviants attacked Babylon, Mesopotamia in 575 B.C, laying waste to the area and violently killing humans. A heated battle erupted between the Eternals and the Deviant horde. The Eternals were able to kill most the Deviants with relative ease. One large Deviant fought the Eternal Gilgamesh outside the Ishtar Gate, providing a considerable challenge before finally being slain. Over the course of history, thanks to Sprite's narrative, the fights between the Eternals and the Deviants were incorporated in various mythologies, one instance being the duel between Gilgamesh and Enkidu which was translated into the Epic of Gilgamesh.[2]

In Heian-Kyo, Japan, a Deviant known as the Kappa began attacking civilians. Druig and Makkari then showed up to stop it, and fought it away with help from Yoshiie Minamoto. Although Druig assumed the Deviant to be dead, it recovered underground, having absorbed Druig's ability to control minds. The Kappa sent a Deviant to attack Kim Bu-Sik in Korea, and it killed a priest, although Kingo and Sprite were able to stop it before it put the cosmic power it had stolen to use. The Kappa sent more Deviants to Córdoba, where they began attacking civilians, refocusing their attacks on Ajak and Phastos once the pair intervened. However, those Deviants were also chased off by the Eternals, as well as Lope de Fitero. The Kappa then sent another Deviant to attack Thena and Gilgamesh in the ocean, but the Deviant retreated after the battle. The Kappa later sent a deviant to attack a dragon in China, which was stopped by Sersi and Ikaris. Sersi became fed up with fighting Deviants, so they tracked the Deviants to a cave and engaged in a battle with them, where the rest of the Eternals joined. Druig recognized the Kappa and realized it had coordinated the attacks, so Thena killed the Deviant, causing the rest to die as well.[1]

In 1521, the last of the Deviants on Earth were hunted down and killed by the Eternals. However, in Alaska, a group of them that included the leader, Kro, had become frozen in ice, and remained so for centuries.[2]

In 2023, due to the Blip, the ice defrosted, and Kro and his pack were set free. They roamed the ice sheets and killed a group of local oil workers. When the Eternal Ikaris discovered them, he brought Ajak, the leader of the team, there and lured her into their path. The Deviants attacked her, and while she was able to fight a few back with a shotgun, Kro soon killed her, draining her power and taking it for himself. Within his cave, Kro underwent a transformation, and used his tentacles to transform the other members of his pack.

Kro later travelled to London, England, attacking the Eternals Sersi and Sprite, but was forced to retreat after the arrival of Ikaris. Kro reconvened with his pack and they later attacked Druig’s compound in Peru, the pack attacking the various Eternals. In the conflict, Kro killed Gilgamesh and gained sentience after draining his power. Speaking for the first time, he retreated once more. The rest of the Deviant pack were all killed by the Eternals.

Left alone, Kro followed the Eternals as they traveled to stop the Emergence. Arriving on the shore, Kro attacked and injured Makkari. He then singled out and fought Thena in a cave, but was ultimately killed by her. With Kro's death, the last Deviant was slain.[2]

Deviants are alien creatures with usually grey, green or red slimy skin, multiple lashing tentacles, and multiple eyes. Deviants posess an advanced Lamarckian evolution system, which gives them the uncanny ability to take the approximate form of any creature they kill, allowing certain Deviants to possess wings, horns, and fangs. Such Deviants have appeared in avian, canine, praying mantis, reptilian, and bovine-like forms. One Deviant, Kro, after killing two Eternals, gained a near human appearance, as well as speech and full sentience. Kro could also steal the powers of murdered Eternals, being capable of healing and incredible strength as a result.

Most Deviants appear savage and untamable, with little more sentience than the creatures they resemble, and are motivated simply to kill and consume organic life. They communicate in animalistic growls and roars, and hunt prey in the way animals do. Deviants appear to be pack creatures, often appearing in groups. Kro is an outlier to these, as he gains sentience from his killing of Eternals, and hunts alone, attacking Eternals in London. An apparent hierarchy exists among certain Deviants, with Kro being the leader of his particular pack. 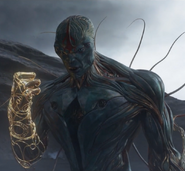 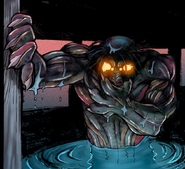 The Marvel Cinematic Universe Wiki has a collection of images and media related to Deviants.