Marvel Cinematic Universe Wiki
Register
Don't have an account?
Sign In
Advertisement
in: Articles to be expanded, Race, Demons

Entities[1]
Energy From Another World[1]

"Call them demons, entities, energy from another world, it doesn't matter. They don't belong here."
"But the violence, the death they cause, they feed off it. Our pain and suffering gives them pleasure."
―Daimon Helstrom and Louise Hastings[src]

Demons are beings with the ability of possession.

Demons have roamed Earth for centuries trapping humans in a vicious cycle. When Kthara's children were attacked, she declared a war between demons and humans.[1] The Blood was formed in response to demons' existence, trapping demons in their host bodies in hotels so that they could not wreak havoc. This group included seven generations of Caretakers. At one point, a group of demons decided to betray their own kind and help the humans to fight demons. They developed the ability to contain demonic powers and became known as Keeper Demons, giving humans talismans made from their deceased's remains they could use as a temporary way to contain demons.[2] During the war, a group of humans brutally attacked Basar, upsetting Kthara. Kthara went to report the murder to the village elders, who did not believe her. However, Basar resurrected several days later and slaughtered the entire village.[3] Basar was eventually contained by a Keeper, who continued to contain it even after its death. The demon's corpse, along with Basar, ended up in a crypt in Colma. This war eventually ended with the humans, whom Kthara and her children referred to as "oppressors," declaring that they should not be shown mercy. However, demons remained and continued possessing people.[1]

Demons eventually made their way into Christian teachings, as some Christians would come to believe that demons were responsible for bad things happening to them.[4]

The demon Marduk Helstrom arrived on Earth and became a mass murderer, killing many people for the enjoyment of their pain. He met a woman named Victoria, whom he charmed, and did not tell about his killing.[5] He killed many people, including Rebecca Torres and two other women in Dallas, Texas.[6] He also killed an architect and stole his cufflinks,[7] as well as two college students who were burned alive in Thomas Park.[8] Victoria married Helstrom, and eventually figured out that he was a killer. However, she could not leave the marriage since she had realized that he was torturing her on purpose.[5]

Marduk and Victoria had children named Daimon and Ana,[1] and gave them a normal childhood.[9] However, that was until Marduk kidnapped Ana, in the process carving up Daimon with a special dagger that could hurt demons, which Daimon split in two. He also marked Victoria for possession. This resulted in Daimon getting a permanent scar on his chest. Marduk then took Ana as he went and killed several people,[1] including someone who was dumped in the Willamette River[10] and an incident involving Zoe Richards, who Marduk and Ana were unaware survived.[11] Marduk eventually decided to let Ana torture one of his victims, handing her the half of his dagger that he took from the kidnapping. However, Ana stabbed Marduk and ran away, eventually getting caught. Marduk buried her underground,[12] assuring her that she would survive because of her strength.[13]

Meanwhile, Victoria had become possessed by Kthara and slowly lost the fight against the demon. Frightened for his mother's well-being, Daimon called the Behavior Health Department, who sent Dr. Meyer to help Victoria. She got taken into protective care and was eventually sent to Saint Teresa Center for Mental Health. Victoria started reliving this memory on loop in her own mind, as part of her being possessed.[14] Daimon began to feel guilty about what had happened, driving him to the point of suicide. He jumped off of a bridge, but was stopped by Marduk, who communicated to him through his head that Daimon would always be his son, before letting him fall safely into the water below.[13]

Marduk's body was later found and cremated,[15] but the demon survived and remained dormant.[13] The Blood had decided to kill Daimon and Ana, who were brought to Saint Teresa's for psychological evaluation. During this time, Ana had begun to develop demonic abilities, causing a nurse to faint. Caretaker convinced the Blood to merely separate the siblings rather than kill them, and he told Louise Hastings. Frightened of Ana's abilities, Hastings decided to take in Daimon, while Ana was put into the foster care system, where Caretaker would regularly check in on her.[12] However, Daimon also soon started showing demonic abilities when he was bullied at his school, causing the bullies and several objects to fly across the room and setting his backpack on fire. Daimon began to see himself as a monster, but Hastings assured him that he was not.[9]

Daimon and Ana separated themselves from demonkind, leading them to be labeled traitors, especially Helstrom's son, who began exorcising demons with Hastings. Although, as Helstrom and Chris Yen began performing murderous acts of vigilante justice together, demons came to appreciate her.[15]

Following the deaths of Jack Benson, Frank Delacourt, and Arlene Willoughby, as well as the apparent death of Tobias Ford, Ford became trapped between Earth and another dimension. Although Ford was responsible for the deaths, Hannah Hutchins took the blame. Ford began following Hutchins as people in her hometown of Batesville began to turn on her. Ford began defending Hutchings by invisibly attacking the people who said hurtful things toward her, such as destroying a Roxxon Gas Station and attacking a mob that was forming around her house. Hutchins did not like the damage Ford was doing, although she was unaware that Ford was responsible. While S.H.I.E.L.D. believed her to have telekinetic abilities, Hutchins believed that Ford's actions were the result of God punishing her for Benson, Delacourt, and Willoughby's deaths by sending a demon too torture her.[4]

Spirit of Vengeance and the Ghost Rider

"You can't hold on to Mack's body forever. He's a good man. He doesn't have vengeance in him."
"It's not ideal, but Mack... He has a lot of pain. He lost Hope. I could survive off his pain for years."
―Robbie Reyes and the Spirit of Vengeance[src]

An extremely powerful inter-dimensional demon[16] known as the Spirit of Vengeance escaped from the Dark Dimension and arrived to Earth.[17] Being a demon who bear desperation and a desire for vengeance he bonded with several humans turning them into the Ghost Riders[18] such as Johnny Blaze and Robbie Reyes.[19]

When Robbie Reyes was being dragged into Hell, the Spirit left Reyes' body and bonded with S.H.I.E.L.D. agent Alphonso Mackenzie. However, the Spirit was followed by Reyes, who claimed they still had unfinished business. Reyes decided to make a new deal with the Spirit: if the Spirit helped him to take down Morrow, he would help him to settle down his own old scores. The Spirit, thus, bonded again with Reyes and they both defeated Eli Morrow while being taken to the Dark Dimension in the process.[17][20] Eventually, the Spirit and Reyes, now bonded as the Ghost Rider felt the Dark Matter that Aida used to make her own body and helped S.H.I.E.L.D. in their conflict against her. In order to kill Aida, the Spirit momentarily bonded with Phil Coulson. However, Coulson's possession caused the cancellation of the GH.325's effects which had kept Coulson alive since his resurrection, dooming him.[21] The Spirit and Reyes took the Darkhold to the Dark Dimension.[22]

Some demons were former humans with particularly malevolent personalities. The oldest and most powerful of them have the ability to "mark" human hosts. This allows lesser demons to possess their victims. This mark appears as a gaping wound anywhere on the victim's body.[15][5]

Demons possess humans to grow stronger. They feed off their victim's energy until the body burns itself out; an analogy is that they steal the victim's soul for themselves. They also feed off the negative responses they elicit from others.[15]

Human bodies controlled by demons tend to exhibit supernatural strength and abilities. Demons can keep their hosts alive even through injuries that would kill normal humans, and will only discard the flesh unwillingly or after fulfilling some goal.[15][9] Being in human hosts, however, means demons are still vulnerable to things that can subdue humans like sedation drugs.[2]

Some demons, known as Keepers, are a rare breed that turned on their kind and specialize in preventing other demons from causing mayhem. Their remains or artifacts made from their remains can neutralize demons for limited periods of time.[2]

Demons who possess humans can be exorcised out of their hosts by specially-empowered beings. However, this only sends them back to where they came from and doesn't actually kill them, leaving the demon to learn and bide its time before it returns in another host. The Blood, an anti-demon organization, attempts to delay this by keeping hosts in comas for the rest of their lives.[2]

Other demons[16] as the Spirit of Vengeance are very powerful entities that manage to use their powers by bonding with other beings. The Spirit bonded with Humans transforming them into the Ghost Rider. Compared to the other demons, the Spirit explicitly bears desesperation and desire of vengeance. The Spirit can bond with other hosts by simply touching the person or transferring itself to another human, sometimes without the host's consent.[19][17]

The Spirit has proven to be the most powerful demon as it can imbue the person he possesses with immeasurable supernatural power such as increased physical abilities, healing, hellfire manipulation, object empowerment as well as a degree of fire manipulation.[23] The Spirit of Vengeance is also able to ressurrect the one that is possessed.[19] 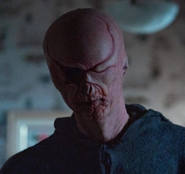 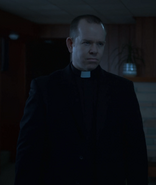 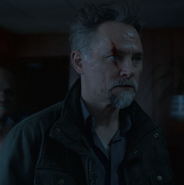