Marvel Cinematic Universe Wiki
Register
Don't have an account?
Sign In
Advertisement
in: Articles to be expanded, Teams, S.H.I.E.L.D. Teams

Agents of S.H.I.E.L.D.
*The Totally Excellent Adventures of Mack and the D
*Stolen
*What We're Fighting For (mentioned)

"This isn't a cover band. The band is a cover... Director. I wanna introduce you to the Deke Squad."
―Deke Shaw to Alphonso Mackenzie[src]

The Deke Squad is a band formed by Deke Shaw during his time living in an alternate timeline 1980s, with Shaw stealing songs from the prime timeline's future and claiming it as his own. However, the band also doubled as a cover for Shaw and the bandmates to operate as unofficial agents of S.H.I.E.L.D.

The Deke Squad eventually enrolled in S.H.I.E.L.D. Academy to become official agents, and were partially absorbed into the organization, with Shaw becoming the Director of S.H.I.E.L.D.

"I appreciate the effort you put in. I really do. But this is terrible spy-craft to be this high-profile."
"Exactly. That's the whole point. Think about the practical applications. We move freely from town-to-town. Big cases of high tech "equipment" are part of the gig. And any strange behavior, they just chalk it up to drugs."
―Alphonso Mackenzie and Deke Shaw[src]

In an alternate timeline 1982, after Alphonso Mackenzie and Deke Shaw were separated from the rest of S.H.I.E.L.D., they began to argue about their situation. Distraught at the death of his parents within this new timeline, Mackenzie drove away from Shaw, separating the two.

In the time approaching alternate 1983, Shaw began to gather members of a new S.H.I.E.L.D. unit to track Sibyl's activities. Among the new members were Roxy Glass, Olga Pachinko, and Tommy and Ronnie Chang. They made a renovated headquarters at the Lighthouse. In their off time, the group also operated as a performance band at Swayze's Bar as "The Deke Squad". In need of a drummer, the band also hired Cricket. The team managed to recover Phil Coulson's hard drive after he sacrificed himself to destroy the Chronicom ship, placing its contents within a computer attached to a television screen. This allowed Coulson to continue operating as an information-gathering tool, who assisted the unit in hunting Sibyl.[1] Throughout their performances, Deke Squad opened for Twisted Sister, and John Garrett saw their performance.[2]

"Deke, your friends are a long way from being S.H.I.E.L.D. agents."
"But that's where you come in. We need a leader."
―Alphonso Mackenzie and Deke Shaw[src]

The Deke Squad was scheduled to perform at Swayze's Bar in 1983. Following a series of attempts by Deke Shaw to rekindle his relationship with Alphonso Mackenzie, he left a note under the director's door, inviting him to visit the bar; he was unaware that Shaw's band were that night's performers. Mackenzie attended the event, asking the bartender if she knew where Shaw Shaw was. She was surprised that Mackenzie was unaware of Shaw's position, informing Mackenzie that everyone in the bar came to see Shaw. Mackenzie was confused when she claimed Shaw was part of a band. Mackenzie watched as Shaw and his band walked onto the stage.

Shaw made his entrance onto the stage, claiming to have written the song that he then performed. In complete shock, Mackenzie asked the bartender for a drink. He then became very disappointed as Shaw sung "Don't You (Forget About Me)" by Simple Minds, a defiance of the group's previous "Ripples, not waves" time travel policy. After a series of performances by the band, Shaw exited the stage, and began to talk to Mack. Mackenzie commented that Shaw's previous song had been featured in The Breakfast Club. After an argument, Shaw began to flaunt the band's merchandise sales, and specifically highlighted their new cologne, "Tattletale". After Mackenzie claimed that the invite was for a "stupid cover band", Deke then informed him that the band was actually a cover for their secret S.H.I.E.L.D. unit.

Shaw then introduced Mackenzie to the group. Mackenzie was surprised that Shaw recruited Cricket, as he had previously called him "shady". Shaw then clarified that Cricket had a steady job. Because both are referred to as "Coke", Shaw thought that Cricket sold Coca-Cola, when he was actually selling cocaine. Mackenzie expressed disagreement with the spy agency being so high-profile, which Shaw refuted by pointing out the practical application; moving from town to town for performances while secretly hunting Sibyl. Shaw then took Mackenzie back to the Lighthouse as Mackenzie hoped desperately that Shaw didn't renovate it.[1]

Meeting at the Lighthouse

"You build something out of a lie, you pretend it's yours, then you surround yourself with a bunch of sycophants!"
"They aren't sycophants! They have my back! And they won't give up on me when the going gets tough!"
―Alphonso Mackenzie and Deke Shaw[src]

When they arrived, Alphonso Mackenzie was disappointed to find the Lighthouse had been turned into a pseudo-club. Tommy and Ronnie Chang were happy to meet the Director for the first time, but became distracted talking about fighting styles. Mackenzie became increasingly angry, and eventually snapped at Deke Shaw for turning the facility into a party pad. Shaw claimed that Phil Coulson was okay with the change, which surprised Mack. Shaw then turned on Coulson's new computer form. Mackenzie and Coulson briefly conversed about his odd situation.

Citing his previous discussion with Sibyl, Coulson explained that she uses the Time Streams to predict the future. When Mack questioned how Sibyl survived, Coulson explained his surprise at even his own survival. Shaw presented evidence that Coulson found to Sibyl's recent activities.[1]

Attack on the Lighthouse

As Deke Shaw was not authorized to make them S.H.I.E.L.D. agents, the Deke Squad members joined the S.H.I.E.L.D. Academy to officially become part of S.H.I.E.L.D.[2] 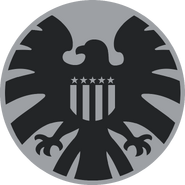 The Marvel Cinematic Universe Wiki has a collection of images and media related to Deke Squad.
Community content is available under CC-BY-SA unless otherwise noted.
Advertisement