Deals With Our Devils

Deals With Our Devils

"You're right. I won't survive this without you. But the truth is you need me, too. We had a deal! How about a new one? Give me my vengeance on Eli. Settle my score, and I'll settle yours... All of yours!"
―Robbie Reyes to Spirit of Vengeance

With the loss of half the team, the remaining members search for answers as the clock counts down for Ghost Rider.

After Eli Morrow successfully acquired matter creation power, Melinda May and Alphonso Mackenzie lead a S.H.I.E.L.D. team inside the Roxxon Power Plant in order to find Phil Coulson, Leo Fitz and Ghost Rider, who were inside the facility when the reactor delivered a violent outburst. However, they cannot find them or any trace of them. Meanwhile, the other S.H.I.E.L.D. agents find Morrow, who quickly kills them by growing carbon spikes out of their bodies before leaving the power plant, creating a solid carbon wall so that nobody can follow him.

May and Mackenzie go back to the Zephyr One where they watch video footage from the blast with Jeffrey Mace, Quake and Gabe Reyes, and it soon appears that their friends simply vanished because of the blast, which makes them struggle to accept their friends' demise. Quake and Johnson suggest calling Jemma Simmons for help.

May and Mackenzie discuss the disappearance of Coulson, Fitz and Ghost Rider. May is considering using the Darkhold to find a solution to bring back their friends, but Mackenzie advises against it. Mace joins them and Mackenzie offers to track down the Chinatown Crew lead. They also decide to return to the Playground where Holden Radcliffe awaits them in order to help them studying the Quantum Batteries designed by Momentum Labs. While Johnson and Gabe discuss the life of Robbie and whether he is dead or not, Mack displays sudden anger and violently knocks a S.H.I.E.L.D. agent before leaving the Zephyr One, riding his motorcycle.

It soon turns out that Coulson, Fitz and Ghost Rider are not dead. Instead, they are alive and can still see and hear what happens in the real world but cannot interact with it. Therefore, Coulson and Fitz see Mackenzie and May searching for them inside the Roxxon power station without finding them and cannot tell them that they are not dead. They find Ghost Rider, who is also trapped, and they all go to the Zephyr One, where they hear their friends discussing their possible death without being able to tell them that they are still alive. Fitz hypothesizes that they are experiencing the same thing than Lucy Bauer but to a greater extent: they are trapped between dimensions.

Fitz follows Mace while he tries to call Simmons and discover that Mace does not know where she is, that he is unable to reach her and that he has business with the anti-S.H.I.E.L.D. Senator Ellen Nadeer. Before he can investigate further the situation, Reyes tells him that he feels freezing and shortly after, the Spirit of Vengeance transfers from his body to Mackenzie's, which explains the latter's violent behavior.

Johnson decides to follow Mackenzie with Hell Charger and Reyes joins her, even if she is not aware of it. Johnson finds Mackenzie at the Chinatown Crew headquarters. Mackenzie turns into the Ghost Rider and explains that he will not come back since Mackenzie is in a lot of pain. However, Reyes finds them and it turns out that Mackenzie can see him. Reyes strikes a new deal with the demonic entity, which returns in his body, freeing Mackenzie who goes back to the Playground with Johnson.

At the Playground, Radcliffe and Aida studied the Quantum Battery, saying that the technology is way beyond anything known. May tells Radcliffe about the Darkhold and says that it could contain some answers, but Radcliffe immediately closes it after having begun to read it, troubled by its power, and refuses to read it further. Unbeknownst to them, Coulson and Fitz are watching the whole scene and when Fitz tells that Aida should read the book, he and Coulson argue about her android nature, with Coulson telling Fitz that he should not have worked on such a project. They finally get along and watch Aida read the Darkhold. The Book of Spells reveals her two new technologies, the Laser-Coupling Gloves and the Inter-Dimensional Gate that Radcliffe and Aida manage to build in order to open a portal and save Coulson and Fitz right before they could be aspired in Hell. The portal is later used by Reyes to return to the Earthly Plane as well.

In parallel of all those events, Simmons is still on her secret assignment, which consists in studying an Inhuman, whose name she cannot know, who has been stuck inside his Terrigenesis husk for seven months. After monitoring his heartbeat, she figures out that the subject is too much tense and orders everyone else to leave the room. She then helps the subject to complete his Terrigenesis but before he can tell her his name, Simmons is taken out of the room and brought back to the Playground, where she is reunited with Fitz.

Having returned to the Radcliffe Residence, Aida uses the Laser-Coupling Gloves to map a Quantum Brain which is a functional brain made of pure light. 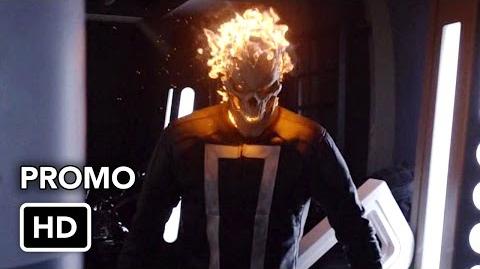 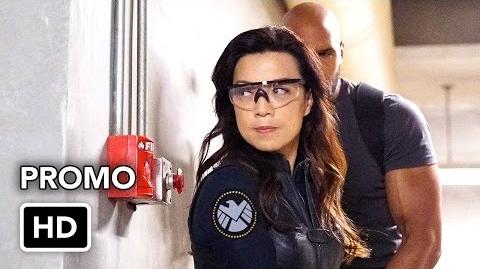 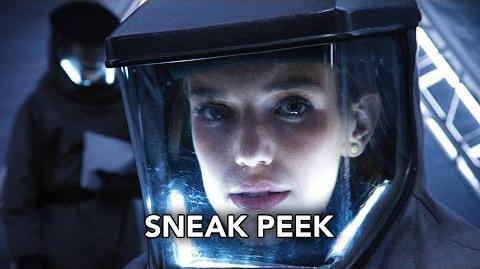 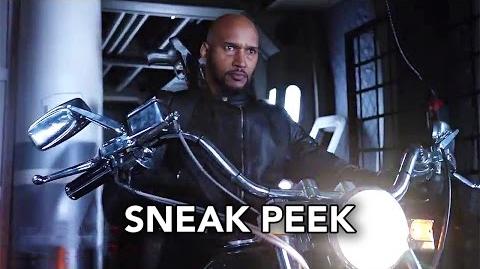 The Marvel Cinematic Universe Wiki has a collection of images and media related to Deals With Our Devils.