"Long before the birth of light there was darkness, and from that darkness came the Dark Elves. Millennia ago the most ruthless of their kind, Malekith, sought to transform our universe back into one of eternal night. Such evil was possible through the power of the Aether, an ancient force of infinite destruction."
―Odin[src]

The Dark Elves (known as Svartálfar by the Ancient Norse, Älfeneel or Harudheeniksel by the Dark Elves themselves) are the oldest known species in existence, hailing from the obscure realm of Svartalfheim. They are one of the mortal enemies of the Asgardians, the other are the Frost Giants. Some members of their race have been shown to have the fortitude to wield the power of an Infinity Stone. They are now presumed to be critically endangered as a species or even extinct.

The Dark Elf race originated in the Ginnungagap ("yawning abyss"), the vast, primordial darkness that existed prior to the creation of the manifest universe, where they reigned absolute and unchallenged.

When the universe came into being and the other civilizations of the Nine Realms arose, the Dark Elves sought to return the universe to its former state of darkness. It was then that their leader, the sorcerer Malekith, engineered the Aether, a super weapon forged from the substance permeating and surrounding the universe before it came into being.

The Asgardians, led by their then-king Bor, fought a fierce war with the Dark Elves, eventually driving them back to Svartalfheim as Malekith attempted to use the Aether. In that final battle, with the Convergence approaching, the Dark Elves fought with all of their might, utilizing their advanced technology as well as their elite troops, the Kursed, to attempt to halt the Asgardian advance. The Asgardians were able to triumph, however, launching an attack on Malekith and his bodyguards. During the struggle, the Aether was lost to Malekith, taken by the Asgardians via the Bifrost. His plans ruined, Malekith launched a final, suicidal attack on the Asgardians, dropping the Dark Elf ships out of the sky in an effort to crush all beneath them.

Malekith himself escaped the battle, along with dozens of his kin and his lieutenant, Algrim, who would later become one of the Kursed himself. The battle caused the utter destruction of the rest of the Dark Elves, leaving those that escaped aboard Malekith's ship as the only survivors. Five thousand years later, as the Convergence neared again, Malekith attempted to use the Aether again. By this point, however, it had planted itself within the body of the human woman Jane Foster. Malekith led his kin in an attack on Asgard, where Thor had taken Foster.

Using cloaking devices, Malekith's ship, along with a number of smaller ships, were able to launch a surprise attack on Asgard, using their nimbleness and durability to smash through the Asgardian defenses, though two of the ships were destroyed by the Asgardians in the process. The final ship, with assistance from Algrim, now the last of the Kursed, managed to break through the Asgardian defenses and disgorge its complement of Dark Elf soldiers, along with Malekith himself. The Dark Elves engaged the Asgardian soldiers, both sides suffering heavy casualties as Malekith made for the chambers of Frigga. The Dark Elves were eventually driven away, bereft of their prize, losing three ships and dozens of soldiers in the process.

When Thor, Foster, and Loki came to Svartalfheim in order to trick Malekith into removing the Aether from Foster where it would be destroyed, a number of Dark Elves accompanied Malekith and Algrim onto the field. In the ensuing fight, Loki and Thor killed all of the present Dark Elves, including Algrim, though seemingly at the cost of Loki's life. The rest went to Earth, where they could disperse the Aether to all nine realms and destroy the universe. The rest of the Dark Elves were killed in the ensuing battle, along with Malekith.[1]

At least one of the Dark Elves did not die in the presumed extinction of his species due to a found specimen held in Taneleer Tivan's museum before Carina's suicide, resulting in an explosion.[2]

"I thought you said you knew how to fly this thing."
"I said, “How hard could it be?”"
―Loki and Thor, about a Dark Elf Harrow[src]

Being the oldest race (predating the Universe itself), Dark Elf technology was very advanced, surpassing even the Asgardians'. They possessed massive, black, T-shaped spaceships with red lights that could travel between the Nine Realms. Each ship could carry several smaller, nimbler "Harrow" craft that could function as troop transports or fighters, using their blade-shaped hulls and superior durability to ram enemy ships and fortifications. Their cloaking devices could render them invisible to any means of locating them, and could even conceal them from the all-seeing eyes of Asgard's guardian, Heimdall. They were also extremely durable, able to withstand projectiles from Asgardian weaponry to a point, and also able to smash through objects without any noticeable signs of damage. The Dark Elf Harrow craft's engines each contain a small black hole used as a propulsion source; the red glowing aperture at the ship's front allows it to "fall" along the direction of travel at very high speeds.

The Dark Elves also possessed plasma energy weapons in a similar vein to the Chitauri, along with swords, bladed gauntlets, shields, and grenades that generate miniature black holes that absorb and crush anything caught in the blast radius before disappearing a few seconds later.

"You'll be the last of the Kursed."
"Let my life be sacrificed. The same as our people."
"You will become darkness, doomed to this existence until it consumes you. Until then, no power our enemies possess can stop you."
―Malekith and Algrim[src]

The Dark Elves also possessed their own form of enhanced "super soldiers" known as the Kursed. These, tall, extremely muscular soldiers gained their abilities through the breaking of Kurse Stones, gaining immense strength and durability at the cost of being eventually consumed by darkness as the "curse" killed them. All of the previous Kursed soldiers died during the Dark Elves' final battle with the Asgardians five thousand years ago, until Algrim became the last Kursed soldier in order to forward Malekith's plans to gain the Aether. Algrim was killed during the Second Battle of Svartalfheim, bringing the end to the Kursed.

The Dark Elves also seem to be immune to certain physical laws, as Svartalfheim is very different from that of the other Nine Realms, located in a star system that is almost completely corroded with dark matter, and following slightly different physical laws, with a slightly different table of elements; and, once "Kursed", the Dark Elves are some of the most formidable beings in existence. The Kursed themselves proved nigh-indestructible when battling the Asgardians, and proved so strong as to punch right through force fields, destroy Asgard's shield mechanisms, and knock Thor's hammer, Mjolnir, right out of the air in mid-flight into a rock face, a feat no other being in the universe has been known to have accomplished.

The Dark Elves' appearance is humanoid, along with elves' trademark pointy ears, scar-like ridges on their cheekbones, paler skin, deep-set eyes, and a raised forehead. They were once beautiful race, as can be evidenced by their masks, but the universe of light and matter is poisonous to them and corroded their appearance to a more monstrous one. Their masks maintain their life force, shielding them from the poisonous effects of the existing universe.[4] Their masks also show evidence of enlarged eyes, possibly adapted for seeing in the darkness.

Shiväisith[5] was the Dark Elves' native language. Although the Dark Elves were fluent in other languages, their native tongue was a preferable choice when speaking among each other. 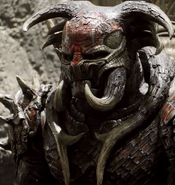 Algrim †
Add a photo to this gallery

The Marvel Cinematic Universe wiki has a collection of images and media related to Dark Elves.

Retrieved from "https://marvelcinematicuniverse.fandom.com/wiki/Dark_Elves?oldid=1059622"
Community content is available under CC-BY-SA unless otherwise noted.