The First Season of Daredevil premiered on April 10, 2015 on Netflix.

Marvel's Daredevil is a live action series that follows the journey of attorney Matt Murdock, who in a tragic accident was blinded as a boy but imbued with extraordinary senses. Murdock sets up practice in his old neighborhood of Hell's Kitchen, New York where he now fights against injustice as a respected lawyer by day and masked vigilante at night.

Matt Murdock at the age of nine tried to save a man from being hit with a truck filled with hazardous waste. But, in the process a barrel exploded and landed in Matt's eyes, blinding him. while simultaneously enhancing his remaining senses to superhuman levels. Not long after, his father, a Boxer named Jack Murdock got involved with the Irish Mafia in a rigged fight. He made a deal with Roscoe Sweeney that he would lose a fight against Carl Creel. However, Jack won the fight anyway and shorted the mafia, being hit by them that very night. Matt, with no relatives to care for him, was sent to Saint Agnes Orphanage, suffering the complications due to his heightened senses. However, a man named Stick taught him how to manipulate them, not only to be controlled, but to help overcome his blindness. Stick also trained him in Martial Arts, with the intention of turning Murdock into a warrior to fight the Hand. But after he realized despite all his hardship Murdock had gone through, he still retained a sense of innocence left Murdock's life completely without an explanation. After that he led a mostly ordinary life, where he went to college and befriended Foggy Nelson. The two of them studied law and had ambitions of becoming conscionable lawyers. Later, founding the Nelson and Murdock law firm.

Wilson Fisk had a traumatic, unstable childhood. Though his mother, Marlene Vistain was kind and gentle to him, his father, Bill Fisk by contrast was violent and abusive. Bill would frequently beat Marlene and have Wilson stare at the wall, not seeing but still hearing the terrible violence. Bill made it a goal to teach Wilson to terrorize and harm anyone who stood in his way, encouraging him to brutally beat a neighborhood bully even after he agreed to change his ways. One night when Bill was once again beating Marlene, Wilson finally had enough of his father's wrath and bludgeoned him with a hammer to death. To prevent all knowledge of what happened, Wilson’s mother helped get rid of the body, but the guilt of the incident weighs heavy on her. Even well into his adult years, his father’s dark lessons in cruelty, power, respect, and control helped mold him into the man he is today, the Kingpin.

After the Battle of New York, Hell's Kitchen is struggling to recover. Crime is in an all-time high due to the rise of a crime syndicate working under the successful construction company Union Allied Construction. Utilizing drugs, weapons, and gangs to de-value the local property, it was their plan to make certain areas un-inhabitable so they can move in to remake them into new crime-controlled buildings as a major staging area for future endeavors.

Matt Murdock and Foggy Nelson set up their law firm, Nelson and Murdock in Hell's Kitchen within the midst of this crisis. Just starting their practice without any clients, they get occasional tips from the New York City Police Department to gather cases to help start their business. Shortly after getting their very first client, Karen Page. A woman framed for murdering her friend and co-worker by Union Allied in an attempt to protect their criminal activities from being outed. Union Allied eventually tried to go after Page when she attempted to get legal help, but Murdock disguised in a black suit, used his martial arts skill and superhuman senses to protect her. Legally, Murdock and Nelson successfully used the law to help free Page and absolve her of all criminal charges. Grateful for the duo’s save, Page decided to work with the two as their secretary and the trio form a strong bond as friends.

Murdock continued his vigilantism, secretly prowling the streets after work to help the innocent affected by crime. While waging a one-man war against the Russian Mafia. While he continued to do this, he was ambushed and badly beaten by them, barely surviving the encounter. He was later found and helped by Claire Temple. Because he was unmasked, Temple saw his face and fact he was blind, she was baffled that despite that he had an extra-sensory perception of his surroundings. With the help of Temple, Murdock recovered and was able to find and rescued a kidnapped boy, but not without also drawing the anger of the Russian Mafia and Union Allied.

In between the events of Murdock’s one-man war against the crime syndicate. Wilson Fisk, the unofficial head to their operation, recently took a fancy to art curator, Vanessa Marianna. In love with her, he made every effort to court her. Meanwhile, Vladimir and Anatoly Ranskahov, brothers and leaders to the Russian mob weren’t pulling their weight due to Murdock’s intervention; Anatoly thought he could smooth things over by personally reaching out to Fisk, but he accidentally ruined Fisk’s romantic dinner with Marianna and scared her away. Humiliated and enraged, Fisk personally killed Anatoly by smashing his head with his SUV’s door and used Matt’s mask to blame it on Daredevil; Vlad swears vengeance for his brother. Fisk knew the ruse wouldn’t last forever and plotted a means to end their partnership with the Russian mob.

Ranskahov heard a rumor that Fisk and Murdock were actually working together, and readied his men to turn on him. However, Fisk was prepared and he had Ranskahov’s base bombed to get rid of him. However, Murdock was also present and Ranskahov managed to survive the bombing. Because Fisk’s name was rarely mentioned, Murdock has been actively investigating him, which led to the same warehouse the Russian Mafia was tied up in. Murdock survived the explosion, however. In order to learn more information about Fisk, Murdock brought Ranskahov with him as a group of corrupted cops are in pursuit.

Ranskahov at first thought he was meeting his brother’s killer and still wanted revenge. However, he later realized Murdock was a scapegoat and Fisk was the true killer. Fisk also hired his own personal group of corrupted cops, working for him to eliminate evidence of his activities. Should his name be mentioned to the police, someone would eventually have the witness murdered. Ranskahov knew he couldn’t last long and decided to help Murdock escape capture by the police, but at the price of his life.

While investigating on one of Fisk's associates, Leland Owlsley, Murdock ambushes him disguised, and tries to get some information out of him. However, Stick affected his concentration and Owlsley escapes. Stick returns to call for Matt’s help to prevent Fisk’s Japanese partner, Nobu Yoshioka, from successfully transferring a living weapon called Black Sky. Stick knew of Murdock’s moral feelings about killing people and made a farce agreement to not kill anyone. However, as soon as Murdock realized Stick was going to kill a young boy, he intervened. However, Stick still managed to kill the boy later, enraging Murdock for the two to fight inside his apartment, eventually managing to actually overpower Stick for the first time. Despite their friction, Stick left behind his personal combat weapons for Murdock to use.

Meanwhile, Nelson and Page had been secretly working with Ben Urich to build a credible case against Fisk. Page's recent misfortunes has been tied to Fisk’s schemes and the three helped investigate the matter to find a means to arrest him. Murdock eventually learns of this plan later and helps everyone as a lawyer and a vigilante. However, just as they are about to create a means to take on Fisk, he appears in the public media to identify himself as philanthropist and major investor interested in injecting money into Hell’s Kitchen to reform it. His daring move took away any leverage the they had, and Urich could not continue on.

Murdock would later encounter Yoshioka and the two would face each other. Yoshioka was eventually believed to be killed, but Murdock was heavily wounded by the fight. Fisk appeared to confront him afterwards. Because of his previous wounds from Yoshioka's blade, Murdock was nearly beaten to death, but still managed to return home, passing out from exhaustion on his living room floor. Nelson came into Matt Murdock's Apartment and unmasked him, only to realize it was Matt the mysterious masked vigilante the entire time. Nelson was enraged and felt lied to. Matt tried to explain everything that has happened, but the revelation was heavy on Nelson as he felt betrayed. Nelson still loved Murdock enough to keep his identity a secret, but the turmoil between the two affected things professionally and privately, causing Page to feel uncomfortable as neither of the two could explain the sudden change in attitudes between two best friends. However, Nelson later learned to forgive Murdock and accepted his vigilante tenacities.

All these near-death encounters made Murdock realize he needed body armor. While fighting with Fisk, Murdock realized he had some sort of tough, light-weight armor on him. He managed to tract down a man named Melvin Potter, the mentally unbalanced engineer that helped Fisk make his armored business suits. Potter actually agreed and later made him the iconic suit he would later use. In between, Page and Urich investigated into Fisk’s past and found Fisk’s mother, Marlene Vistain in a retirement home. It was from her they learned about his dark past; Fisk’s assistant, James Wesley, learned about this and threatened to hurt her friends if she continues. Feeling cornered, Page gunned down Wesley and made a run.

With the Russians and Japanese gone, Murdock redirects his wrath on the Chinese Triad. Led by Madame Gao, she has a group of blind Chinese immigrants act as drug mules that distribute the drugs throughout the city. Murdock intervened and attempted to stop Gao, though he is not able to physically stop her, he essentially destroys the drug processing plant. With all of Fisk’s partners gone, Urich wanted to publish his story about Fisk through his newspaper company the New York Bulletin, but they didn’t want to; Ben published it through online instead. Urich’s choice incurred the wrath of the Kingpin and Fisk personally chocked Urich to death.

At Urich’s funeral, Page felt responsible for his death; Murdock reassures that Fisk will face justice and Urich's wife, Doris Urich, absolved Page's guilt. Earlier, Marianna drank poisoned champagne during a public outing and Fisk would later learn it was Owlsley’s and Gao’s plans to end her as Marianna has been affecting Fisk’s mentality that’s against their wishes. Owlsley tried to blackmail Fisk, but an enraged Fisk simply grabs and throws him down an open elevator shaft.

After gathering enough credible evidence against Fisk, Murdock and the police was able to charge Fisk for criminal activity and was arrested. However, Fisk had people paid out of his wallet; he managed to create a personal army via former commandos, police officers and SWAT Agents who helped Fisk escape capture. It wasn’t long that the engineer that made Fisk’s armor completed Matt’s armor. Finally donning the Daredevil costume, Murdock personally takes on Fisk as Daredevil, and wins after a fairly difficult fight. Fisk is now arrested and in jail; Marianna escaped and left the city. Murdock, Nelson, and Page enjoy the thrill of victory while resuming their work; within the city newspaper, that renamed the Hell’s Kitchen Devil to officially "The Daredevil". Murdock continued on his guardianship and vigilantism over the city as the Daredevil. 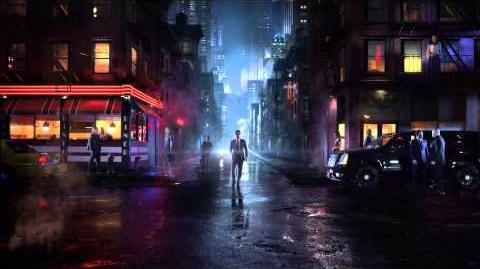 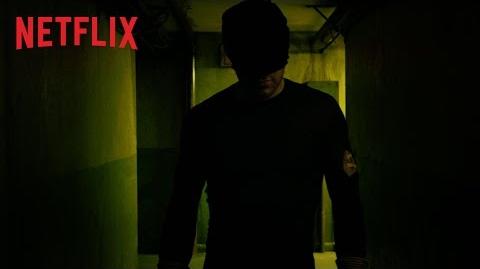 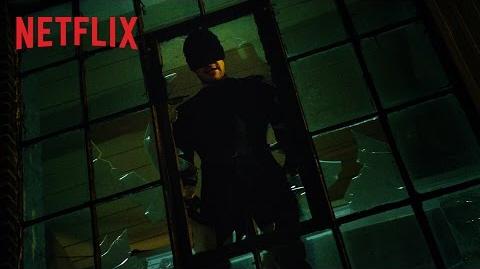 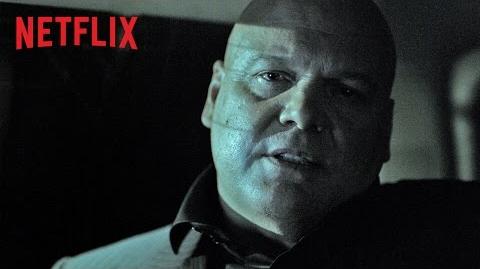