Luke Cage
*Moment of Truth
*Code of the Streets (corpse)

"Dante was one of my kids. [...] Just like those kids playing over there. You know, that's how you get 'em on your side. Sweepin' up hair. Runnin' errands. Lettin' 'em hang out, play video games. Anything is better than what's waiting for them out there on the street. They want a way out but they have too much pride to ask for help."
―Pop[src]

Dante Chapman was a bartender working at Harlem's Paradise.

Dante, alongside Chico Diaz and Shameek Smith, robbed an arms deal between Cottonmouth and Domingo Colon. Dante used inside knowledge of the deal to learn the location of the meet at a junkyard. During the confrontation, all of Cottonmouth and Domingo's men were killed. Dante began to freak out, knowing that Cottonmouth would realize it was an inside job because he had called in sick to work that day. Shameek shot Dante, reasoning that he would tell Cottonmouth who robbed him. As Dante lay dying, he got word to Tone about who was responsible for the robbery.[1] 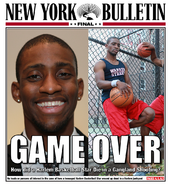 Retrieved from "https://marvelcinematicuniverse.fandom.com/wiki/Dante_Chapman?oldid=1158038"
Community content is available under CC-BY-SA unless otherwise noted.