Dale is the manager of a Baskin-Robbins in San Francisco.

Dale hired Scott Lang, but soon fired him when he discovered that Lang had served three years in San Quentin State Prison for burgling Vistacorp and had lied on his application.

However, Dale admitted to Lang that he admired him for the burglary. Dale promised to look the other way if Lang stole a smoothie on his way out, which he did.[1]

"You really stuck it to those billionaire S.O.Bs. And the more I read about what you did and stuff, I’m like, “Wow, I know this guy? I’m in charge of this guy?” Yeesh! "
―Dale on his relationship with Scott Lang[src]

Dale tries to retain a friendly relationship with his employees, shown by his respect for Scott Lang while firing him. However, for Dale, upkeeping the high-quality standard of his Baskin-Robbins is always the number one priority, no matter whose hearts may be broken along the way. 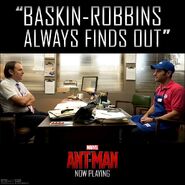