Agent Carter
*Now is Not the End
*Bridge and Tunnel

Sheldon McFee struck a deal with Leet Brannis for use of the Daisy Clover milk truck that he normally drove.

Peggy Carter went to the Roxxon Refinery and trapped Brannis between the milk truck filled with Nitramene bombs and herself at gunpoint. Brannis escaped in the milk truck by throwing a bomb at Carter's feet, allowing thirty seconds for escape.

At L&L Automat the next morning, Carter wrote down the address of the Daisy Clover Milk Factory from a bottle of milk that she ordered. Edwin Jarvis commented that Carter needed something stronger than milk after the night they had had. [1]

Carter disguised herself as a government inspector and talked to the Daisy Clover Foreman that she wanted to inspect the refrigeration system of the trucks; in actuality, Carter had a Vita-Ray Detector and wanted to find the bombs since Nitramene emits Vita Radiation. Carter did not find the bombs but she learned that the milkman McFee was reported to be sick and his truck was missing. Carter requested the address of the missing driver and told the foreman to check the tires of the trucks.

Eventually, Carter and Jarvis went to Cedar Grove, New Jersey and saw Leet Brannis at the residence of Sheldon McFee attempting to start the milk truck; Jarvis disabled it to prevent his escape.

The trio were on their way back to Manhattan when the man in the Green Suit ambushed them by jumping on the top of the truck. The Leviathan operative began shooting. Carter went on the roof of the truck; Brannis drove erratically to throw him off; Jarvis shot at him with a shotgun. She saw a body of water and told Brannis to drive towards it; Brannis was shot in the shoulder. Carter then pinned the hand of Green Suit to the top of the truck with a knife and the trio leapt from the vehicle as it went over the edge. The truck exploded, then imploded.

The flash of light from the implosion was bright enough for Roger Dooley and Jack Thompson to investigate.[2] 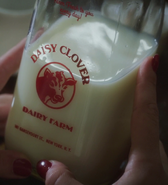 Daisy Clover Milk
Add a photo to this gallery

Retrieved from "https://marvelcinematicuniverse.fandom.com/wiki/Daisy_Clover?oldid=1116945"
Community content is available under CC-BY-SA unless otherwise noted.