Ant-Man and the Wasp Prelude

Originally the company known as Pym Technologies and owned by Hank Pym, it was taken over by Darren Cross with the help of Hope van Dyne. After which, Cross rebranded the name of the company to Cross Technologies which he appropriated as the CEO and van Dyne as his assistant. Since Cross' tenure as CEO, profits for Pym Technologies have risen but innovation has stopped, leading many to question how Pym Technologies will continue to remain profitable.[1] Darren Cross obsessively tried to replicate the Pym Particles. Cross became more unhinged and unscrupulous during his quest to weaponize the Pym Particles. It is alluded that his experiments in shrinking had altered his mind chemistry leading him to become unstable. Cross even ended up assassinating one of his senior executives.

The company started working on the shrinking suit called the Yellowjacket based on an existing technology. The suit was built to be bought by and marketed to military and nefarious organizations around the world, such as the Ten Rings and HYDRA. Eventually Cross succeeded in making his own Pym Particles, branding it as Cross Particles and finalizing the shrinking function of the Yellowjacket. HYDRA ended up outbidding their competitors and made a deal with Cross to buy the suit.

Hank Pym enlisted Scott Lang to become the new Ant-Man and orchestrated a heist of the Yellowjacket Suit. Darren Cross caught wind of the heist and laid out a trap for Lang and his conspirators, Hope van Dyne and Hank Pym. His plan was successful and Darren Cross caught them all at the same night he was planning on selling the Yellowjacket. Hank Pym was shot and wounded but Lang managed to escape his trap and pursue Cross and the Yellowjacket suit. Hope van Dyne and Hank Pym enlarged a miniature tank Pym had been using as a keychain and used it to escape Pym Technologies Headquarters just before it exploded from the explosives they set. Darren Cross later died using the Yellowjacket Suit which was sabotaged by Scott Lang during their duel.[2] 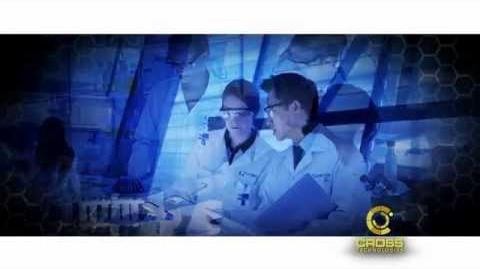