Two different interpretations of the Crimson Dynamo have appeared in video games set in the Marvel Cinematic Universe:

"Stupid Americans, this was never your war."
―Valentin Shatalov[src]

Colonel General Valentin Shatalov was a Russian general and head of the Roxxon Energy Corporation. He was working with the terrorist group A.I.M. in order to create and develop a large suit of armor, which he named Crimson Dynamo.

Valentin Shatalov controlled the Tesla energy program for the Russian Armed Forces. He formed a partnership with A.I.M. and sold them the energy necessary to power Project Ultimo. In return, he asked them for an army of drones for his planned insurrection and for them to build him a Crimson Dynamo armor to best and defeat Iron Man. They gave the suit the capability to control electricity. He later declared himself president and began an insurrection, seized control of the facility with Roxxon Armigers. He then ordered an attack on the Stark Archives, in which Roxxon stole the Dataspine (an archived version of J.A.R.V.I.S.).

When Iron Man, War Machine and S.H.I.E.L.D. attacked the facility in an attempt to liberate it, A.I.M.'s Kearson DeWitt contacted Shatalov and informed him that there was a spy in his midst. DeWitt chastised Shatalov for letting a spy go unnoticed and for bringing S.H.I.E.L.D. to his doorstep. DeWitt warned Shatalov that if he failed to follow orders, their partnership would be over. Shatalov then ordered his troops to prepare the Dynamo and declared that their alliance with A.I.M. was severed and they would fight on alone.

As Crimson Dynamo, he fought Iron Man when he entered the Tesla facility. He powered up his armor through Tesla tower which generated electric energy. By destroying the tower's power projectors, Stark was able to weaken Shatalov's suit. War Machine then grabbed Shatalov from behind and held him in place, allowing Stark to make a critical hit, killing him.[1]

Crimson Dynamo relies on his armor and its weapons systems to perform superhuman abilities. 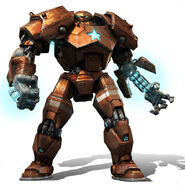 "You are what is wrong with my country, Stark. Too many worship money. Decadence. They glorify themselves over the state."
"You mean like stealing a suit of armor that belongs to your government?"
"I never betrayed the Motherland, it's government betrayed us all! My countrymen need the right leader. When I crush you, they will see it is me."
―Crimson Dynamo and Iron Man[src]

The Crimson Dynamo was a Russian military officer who stole his government's prototype battle armor and allied himself with A.I.M..

The man known as Crimson Dynamo was a Russian ex-soldier and revolutionary sponsored by A.I.M., who stole a prototype battle armor from his government. He made a deal that if he helped A.I.M. defeat with Iron Man, he would be given the Extremis technology A.I.M. wanted to steal from Stark Industries in order to help him seize power in his country.

The Crimson Dynamo ambushed Stark in California and accused him of being cowardly for stopping weapons development. Stark, in turn, accused Dynamo of being a cheap imitation of himself. After a harsh battle, Crimson Dynamo retreated to Stark's calls of cowardice. J.A.R.V.I.S. filled him Stark in on the Crimson Dynamo's past with information from his Interpol file.

Crimson Dynamo attacked Stark again, claiming people like him were the problem with his country, glorifying themselves over their country. Stark retorted by accusing Dynamo of stealing his armor from the Russian government. Dynamo claimed the government betrayed their people first, and that by crushing Stark he would prove himself Russia's rightful leader. After another battle, Dynamo retreated with promises of revolution funded by A.I.M..

When he was guarding A.I.M. operations in China, Stark faced him once more, and the extreme damages suffered during the battle caused Crimson Dynamo's suit to explode and kill him.[2]

Crimson Dynamo relies on his armor and its weapons systems to perform superhuman abilities.

He wears the Crimson Dynamo Armor. 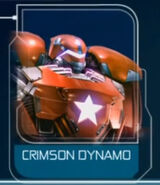 3D model
Add a photo to this gallery

Retrieved from "https://marvelcinematicuniverse.fandom.com/wiki/Crimson_Dynamo?oldid=1227572"
Community content is available under CC-BY-SA unless otherwise noted.