"Isn't it easier to let me take control?"
―The Controller[src]

Basil Sandhurst, also known as the Controller, was an agent of A.I.M.

The Controller was an A.I.M. operative in charge of attacking a military ship in the Arctic in search for power sources. When Iron Man started searching for stolen Stark Tech and destroying different terrorist organizations, he tried to destroy all A.I.M. cargo.[1]

The Controller unsuccessfully tried to mind-control Iron Man, as he managed to destroy every piece of stolen tech, as well as the rest of the A.I.M. operatives but him. He was eventually defeated; however, his whereabouts afterwards are unknown.[1]

The Controller had the ability to mentally control others. Although this power seemed to be low-range, not developed extensively or could be weakened by different substances the victim could be protected with, as he could not mind-control Iron Man by only the latter's willpower. 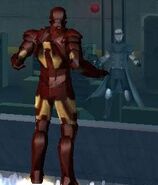 Controller faces Iron Man
Add a photo to this gallery

Retrieved from "https://marvelcinematicuniverse.fandom.com/wiki/Controller?oldid=1077657"
Community content is available under CC-BY-SA unless otherwise noted.