Duel in the Grand Arena
Escape from Sakaar

"The Contest of Champions. People come from far and wide to unwillingly participate in it."
―Grandmaster[src]

The Contest of Champions is a tournament organized by the Grandmaster to entertain the citizens of Sakaar.

"Any contender who defeats my champion, their freedom they shall win."
―Grandmaster[src]

Due to his fascination for the manipulation of other beings into fighting each other, the Grandmaster took control of the planet Sakaar and organized a tournament which was dubbed the Contest of Champions. In this tournament, creatures and beings from all areas of the galaxy captured by scrappers like Scrapper 142 would be forced to fight as gladiators in the Grand Arena. Beings performing long series of victory and providing the audience with spectacular fights were known as the Grandmaster's Champions, and got the honor to have their heads carved onto the tower of the Grandmaster Palace.[1]

"Everyone who fights the Grandmaster's champion perishes."
―Korg to Thor[src]

Scrapper 142 kept capturing and enslaving people for the Grandmaster and eventually found one who would become famous all over Sakaar: the Hulk, whose Quinjet had flown all the way from Earth to Sakaar after the Battle of Sokovia. Seeing the Hulk as a formidable and ferocious fighter, the Grandmaster quickly took a liking at the green giant, who became the new favored Champion of the Contest. Hulk fought and killed numerous other contenders, including Doug, and was widely acclaimed by the Sakaarans who enjoyed watching him defeat his opponents.[1]

Duel in the Grand Arena

"Big round of applause for all of our undercard competitors, who today died so gruesomely. Good sports. What a show! What a night! This is what you've come for, and so have I. And now, without further ado, it's main event time."
―Grandmaster[src]

A new contender was soon brought to the Grandmaster by Scrapper 142: Thor, the Asgardian God of Thunder who had been cast out on Sakaar by Hela. The Grandmaster welcomed Thor in his palace and quickly understood that Thor could prove to be an interesting challenge for his Champion Hulk. Thor was sent to the Grand Arena, ready to defeat the Champion, unaware that his future opponent was his former fellow Avenger. There, Thor met and befriended the gladiators Korg and Miek, and prepared for his impending duel. His brother Loki came to see him and informed Thor that although he did not know who the Champion was, he was believed that he was a ferocious fighter.

Thor was sent to the armory to choose his equipment for his duel against the Hulk. He then went into the Arena and was at first thrilled to recognize the Champion as his friend. However, when Thor called the Hulk with the name Banner, it infuriated the mighty giant who rapidly attacked Thor. A furious duel erupted during which large parts of the Arena's wall were smashed and destroyed, with both opponents dealing violent blows to each other.

At first, Hulk gained the upper hand over Thor, who was stuck beneath Hulk while the green giant severely beat him up. However, Thor had a vision of his deceased father Odin, which suddenly awoke Thor's lighting powers, enabling the God of Thunder to withstand and fight on par with the Hulk, making the crowd publicly acclaim him. The duel was rigged, however, when the Grandmaster activated Thor's Obedience Disk, paralyzing him so that Hulk could easily defeat him.[1]

After their fight, Thor wakes up in Hulk's chamber. The two former allies have a conversation, and Thor keeps pleading for Hulk's assistance, but Hulk refuses to acknowledge their friendship, grumpily stating that Thor likes Banner better. He does, however, reveal the location of the Avengers' Quinjet, nearby on Sakaar. Hulk calls Valkyrie into his quarters, where Thor then starts a conversation with her. The two Asgardians talk, and Thor manages to steal the remote for his control disk from her, taking the implant off, and then making his escape toward the Quinjet.

Hulk immediately follows Thor, not wanting his friend to leave the planet. He catches up to Thor at the jet, and accidentally destroys parts of it. In the accident, Thor turns on Natasha Romanoff's recording left for Banner from the Battle of Sokovia. Hulk is subdued and Bruce Banner is awoken, and despite Hulk's attempts to resist, he transforms back into his self after two years. Soon, they hear an announcement from the Grandmaster that they are hunting Thor, due to believing that Thor has captured Hulk. The two escape from the Quinjet and start making their way through the city. Valkyrie and Loki are sent to find Thor and Hulk by the Grandmaster. After finding out she was one of the Valkyries, Loki makes Valkyrie recall her fight with Hela, she retaliates, fighting and subsequently knocking out the God of Mischief.

Valkyrie finds them and agrees to help, to get revenge on Hela, and Thor names the team "the Revengers." As they prepare, Thor finds her Dragonfang, and warns them not to trust Loki, telling a story of how Loki once turned into snakes to play a trick on him. Loki, not wanting to remain stuck on Sakaar, tells Thor he has the Grandmaster's security codes which will give him control over his systems. Thor sends Valkyrie to deactivate the Obedience Disks so the slaves can help steal the Grandmaster's ship. Around the gladiator quarters, the disks fall off, to Korg's delight. Being provided with a firearm by Valkyrie, he leads a slave revolution.[1]

Thor and Loki team up and go to steal the Grandmaster's Commodore, as it is one of the few ships able to get through the Devil's Anus and into space. Loki then attempts to betray Thor, but Thor incapacitates him with the control disk, having anticipated trickery from his brother, leaving him being shocked on the floor. The Revengers use the Commodore to head to the Devil's Anus. Topaz, the Grandmaster's bodyguard, chases Bruce Banner, but is killed when Banner accidentally sets off fireworks on the vehicle, blinding her and thus causing her to crash. The Revengers manage to avoid the Grandmaster's guards and escape from Sakaar.[1] 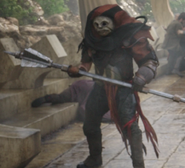 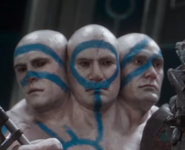 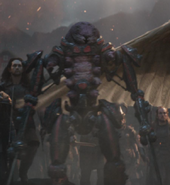 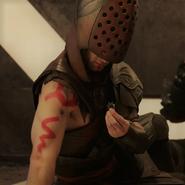 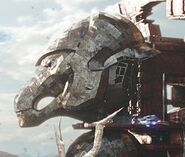 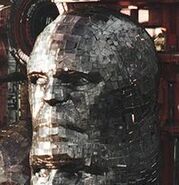 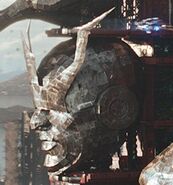