"Congratulations to our super fans Noelle, Frank and Ralph! You showed us that you have what is takes to be Agents of S.H.I.E.L.D."
―Ming-Na Wen[src]

Commencement is the fifth episode of the web series Agents of S.H.I.E.L.D.: Academy.

They put in the work, and now our superfans get suited up for their roles on Marvel's Agents of S.H.I.E.L.D..

Ming-Na Wen congratulates Noelle Mabry, Frank Moran and Ralph Lammie, Jr. for completing their challenges and showing that they have what it takes to be agents of S.H.I.E.L.D..

On the Playground set, a man drops a donut and brushes it aside as he makes his way down a corridor to a large yellow door. He opens the door to reveal Mabry, Moran and Lammie and congratulates them for passing their evaluations. He informs them that they now have access to the set of Agents of S.H.I.E.L.D.. He leads them to their trailers where there is merchandise signed by the cast, which they will receive on completion of their shoot. They are then put through hair and makeup, followed by wardrobe where Mabry is made into a S.H.I.E.L.D. agent while Moran and Lammie become S.H.I.E.L.D. tactical agents. In between, they make a brief stop at the Zephyr One set where all three are assigned with handling weapons.

They are then brought to the prop department, where Moran and Lammie are given belts, helmets and M4 carbines. Finally, they are brought to the set where they are introduced to Clark Gregg, Ming-Na Wen, Elizabeth Henstridge, Iain De Caestecker, Luke Mitchell and Natalia Cordova-Buckley and shoot scenes for the episode Absolution with tips and direction from the cast and crew. They commemorate the experience with a photo of the three of them behind Phil Coulson's desk. 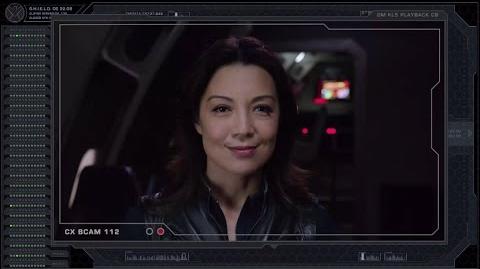 Marvel’s Agents of S.H.I.E.L.D. Academy – Commencement
Add a photo to this gallery

Retrieved from "https://marvelcinematicuniverse.fandom.com/wiki/Commencement?oldid=951508"
Community content is available under CC-BY-SA unless otherwise noted.