"We observe and guide events, occasionally with violence. We do not engage in conflict."
―Atarah[src]

The Chronicoms are an extremely advanced and ancient race of synthetic, semi-robotic beings that operate in the galaxy as observers. There are different types of Chronicoms, designed for different jobs or purposes.

"I was sent here 30,000 years ago to observe and record the evolution of your species. What you would call an anthropologist. My Earth name is Enoch, I'm a sentient Chronicom from a planet which revolves around a star in the constellation you know as Cygnus."
―Enoch[src]

The Chronicoms originated from Chronyca-2. After the development of interstellar transportation, they began exploring the galaxy, obtaining knowledge about other sentient races. Two chronicom scientists were sent to primitive planet Earth, where the humans were developing, and monitored their evolution for millennia, assuming the identities of Enoch and Noah.[1]

"Our protocol allows for one exception; the prevention of an extinction-level event."
―Enoch to Leo Fitz[src]

The Chronicoms had a strict code of not interfering with the natural course of life on the planet they were observing, and would never interfere unless there was an extinction level event.[1]

The Chronicoms' homeworld, Chronyca-2, was invaded by Izel when she was searching for the Di'Allas and proceeded to infect the planet. They, under Atarah's leadership, tried to stop the Shrike, but failed and the planet was destroyed. The Confederacy arrived to pillage the remains of the planet, but the Chronicoms fought back and defeated them. Atarah and the surviving Chronicom Hunters then seized their Confederate Warships and decided to find S.H.I.E.L.D. scientist Leo Fitz to make them a time machine to save Chronyca-2.[2]

"How are you not eaten by those things?"
"They have no interest in me, as I have no tender insides for them to extract."
"Thought Fitz was done building robots."
"I am not a robot."
―Melinda May and Enoch[src]

While they physically resemble humans, Chronicoms do not have gender or inner organs, and are composed mainly of plastic alloy. The Chronicoms are powered by a Electrochron Displacement Mechanism, which is analog to a human heart, and possess other cybernetic components. They do not naturally die unless the Electrochron Displacement Mechanism is removed. They are also are identified as humans by scanners.

There are different types of Chronicoms, including anthropologists, who study life on different planets; hunters, who are skilled in battle, and are tasked with enforcing the natural order of the universe; and predictors, which predict how changes in the timeline will affect history. Any type of Chronicom can be reassigned and reprogrammed by their superiors at a moment's notice to fulfill another role. 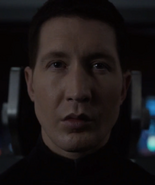