"What would you regard as the defining moment of your life?"
"Well... I think that'd be the day I decided not to let my injury beat me."
―Aldrich Killian and Chad Davis[src]

Sergeant Chad Davis was a former non-commissioned officer of the United States Army injected with Extremis, which eventually killed him.

Chad Davis served in the United States Army before sustaining debilitating injuries. He was offered a second chance when A.I.M. approached him with an offer to restore his body with a gene-controlling process known as Extremis. Davis accepted the offer and became a human test subject, grateful for the restorative effect the treatment had on his body.

Although he was pleased with the new life the Extremis virus had given him, Davis grew increasingly concerned about its side-effects and procured a file containing information on himself and other Extremis test subjects, which he took with him to his parents' home town of Rose Hill, Tennessee. Before Davis could do anything with the file however, the Extremis within him went critical and killed him, incinerating another five innocent bystanders in his vicinity.[1] 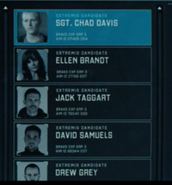 Retrieved from "https://marvelcinematicuniverse.fandom.com/wiki/Chad_Davis?oldid=1339189"
Community content is available under CC-BY-SA unless otherwise noted.