Agents of S.H.I.E.L.D.
*The Asset (mentioned)
*The Singularity

Near Mint (formerly)
Degraded condition due to bloodstains (currently)

"I thought Coulson was gonna swoon. Did he ask you to sign his Captain America trading cards yet?"
"Trading cards?"
"They're vintage. He's very proud."
―Natasha Romanoff and Steve Rogers[src]

"I know Director Fury felt he owes you after you sacrificed yourself."
"And my card collection."
―Grant Ward and Phil Coulson[src]

S.H.I.E.L.D. Agent Phil Coulson spent several years collecting a set of vintage Captain America trading cards from the World War II era. Upon meeting Steve Rogers after his revival, Coulson asked Rogers if he would be willing to sign the collection. Rogers responded that he would, but before he could Coulson was killed by Loki prior to the Battle of New York.

After Coulson's death, S.H.I.E.L.D director Nick Fury took the cards out of Coulson's locker and smeared them in Coulson's blood in order to motivate Rogers and Tony Stark into action against Loki. When confronted about the action later by Maria Hill, Fury would reply that "They needed the push".[1] 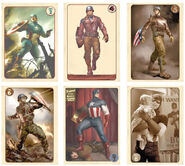 Retrieved from "https://marvelcinematicuniverse.fandom.com/wiki/Captain_America_Card_Collection?oldid=1135923"
Community content is available under CC-BY-SA unless otherwise noted.