The Falcon and the Winter Soldier (picture; unreleased)

"There's nothin' like readin' about Cap in a comic book!"
―Gary Hendricks[src]

Captain America was a series of comic books published in the United States of America during World War II. Designed to help boost the American morale, they told the stories of Captain America's war-time adventures, fictionalizing the actions of the real hero Steve Rogers.

Nick Fury provided Tony Stark with a S.H.I.E.L.D. box from his father, Howard. Inside the box was a number of items, including two Captain America comics.[2]

A US Army soldier reads the first issue of Captain America 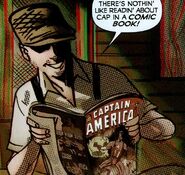 Retrieved from "https://marvelcinematicuniverse.fandom.com/wiki/Captain_America_(Comic)?oldid=1249719"
Community content is available under CC-BY-SA unless otherwise noted.