"So you snap back to the same spot like a yo-yo."
―Alphonso Mackenzie to Elena Rodriguez

Bouncing Back is the eleventh episode of the third season of the television series Agents of S.H.I.E.L.D..

In the aftermath of his trip to Maveth, Coulson is more determined than ever to get to Gideon Malick and put an end to HYDRA once and for all. Daisy and the team encounter more Inhumans who have powers like they’ve never seen before, but will they be friends or enemies of S.H.I.E.L.D.?

Three months from now, a space shuttle carrying a S.H.I.E.L.D. agent explodes as it comes towards Earth.

In the present day, a female Inhuman with blinding speed steals an arsenal from a Colombian police van. The S.H.I.E.L.D. team arrives in Bogotá the next day to investigate. Bobbi Morse, Lance Hunter and Alphonso Mackenzie investigate the crime scene while Daisy Johnson and Joey Gutierrez talk to the police.

Back in the United States, Phil Coulson and Melinda May meet President Matthew Ellis in the late Rosalind Price's apartment to discuss the future of the Inhumans. President Ellis says that Coulson and S.H.I.E.L.D. will effectively run the search for Inhumans, but the ATCU will still be the public face of the mission. He also says he will name a new head of the ATCU shortly, one who knows to take his orders from Coulson. Before the meeting ends, Coulson tries to get information about Gideon Malick from the president. Ellis says his hands are tied due to Malick's connections to the global economy, but hints that Coulson should go on his own.

The team finds tracks the Inhuman left behind; the team in the field split up to cover more ground. Mackenzie finds more tracks and a woman with particularly heavy boots that could have left them. As he approaches her, the woman uses her powers to take Mackenzie's gun from his holster and points it at him. She then uses her powers to force Mackenzie into the back of a van and kidnaps him. The Inhuman has him tied up in her apartment's bathroom. Mackenzie sees the Inhuman hand the guns to a man before closing the door on him with her speed.

Mackenzie cuts himself from his bonds; when the Inhuman opens the door to the bathroom, he kicks her in the chest. He realizes that the Inhuman is snapped back to the place she started moving whenever she uses her powers, "like a yo-yo." However, the Inhuman again uses her powers to overwhelm Mackenzie, and this time ties him to a chair.

At the Playground, Coulson takes Leo Fitz, Jemma Simmons and Lincoln Campbell away from their research into Inhuman physiology to help him get information about Malick from Werner von Strucker. S.H.I.E.L.D. has had Strucker in their custody and in a vegetative state since Malick betrayed him to Ward. Coulson thinks they can use the Theta Brain-Wave Frequency Machine to access to Strucker's memories of Malick.

Malick, meanwhile, is dealing with bigger issues, namely that HYDRA's forces are thin and Hive has returned to Earth. Hive, still in Grant Ward's corpse, is in a weakened state and has only recently started to speak.

Back at Bogotá, at the Inhuman apartment's, Mackenzie tries to talk to the Inhuman, and despite a language barrier finds out she believes her powers are a gift from God. Mackenzie explains to her that she is an alien; Johnson and the rest of the team blow down the door to her apartment. The Inhuman runs at them, but the team put up an invisible mesh to hold her back.

Back at the Playground, Coulson used the Theta Brain-Wave Frequency Machine on von Strucker although the machine gets him talking again, Strucker can only say "Just kill me."

On Zephyr One, the team takes her into their custody, and discover she is Elena Rodriguez, a museum cleric with no previous record of criminal activities. Morse and Hunter go after her accomplice, who they realize is her cousin. Meanwhile, Gutierrez, the only member of the team who knows fluent Spanish, speaks to her about the police and the guns, specifically over how the police abuse their powers to oppress the people.

Back at the Playground, Strucker finally tells Coulson how to find Malick after Campbell uses his powers to alleviate his suffering. Coulson goes to the location Strucker gave him, and, after giving a password to a man at a counter, is brought into a room with only a phone that connects directly to Malick.

Just as the team starts to think they misjudged Rodriguez, they get a call from Morse saying they found her cousin dumping the guns into the river. The police arrive before they can take Rodriguez's cousin away. Morse and Hunter realize the police do not have the purest motives in mind and try to fight them, but one of the police officers is an Inhuman who paralyzes them when they look into his eyes. The police take Morse and Hunter into their custody but kill Rodriguez's cousin to send a message.

In Colombia, the team has the body of Rodriguez's cousin brought back to the plane. Rodriguez agrees to help them save Morse and Hunter from her cousin's killers after Mackenzie talks to her about the role their faith plays in their lives. When the team approaches the police station, Rodriguez uses her powers to swipe a key card from an officer, giving the team a look inside the station. The team assaults the station, easily going through the police officers. Rodriguez runs at the Inhuman, but he uses his powers to paralyze her. Johnson realizes he uses his sunglasses to hold back his powers, so Gutierrez uses his own to melt the sunglasses to his face.

Coulson uses the phone to not only deliver a warning to Malick but to track every other phone to which it connects.

Back in Colombia, although they rescue Morse and Hunter, a HYDRA QuadCopter flies overhead and captures the Inhuman before they can take him away. Once the dust settles, Johnson suggests it would be best to leave Rodriguez behind in Colombia, just so all of the Inhumans S.H.I.E.L.D. trusts are not in one place for a monster like Lash to wipe out in one fell swoop. Rodriguez thanks Mackenzie in English before they leave, and Johnson gives Gutierrez the weekend off so he can see his family.

Elsewhere, Malick nor R. Giyera believe Hive is all he has been built up to be, but the Inhuman assures them he will make them believe soon. Hive holds Ward's hand out to Giyera as the flesh on it dissolves.

Coulson later hears that Gideon Malick's company has shut down numerous locations around the globe, and gets a call from President Ellis informing him of the new head of the ATCU - Glenn Talbot. 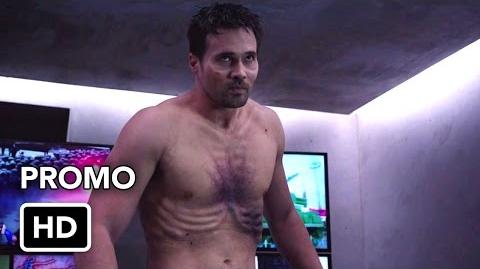 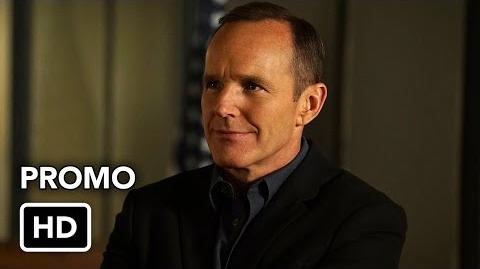 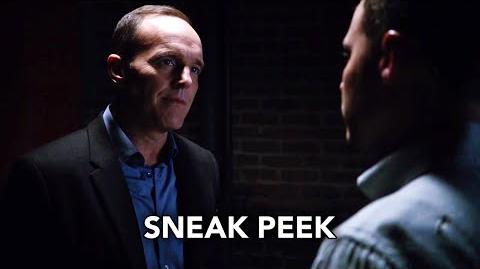 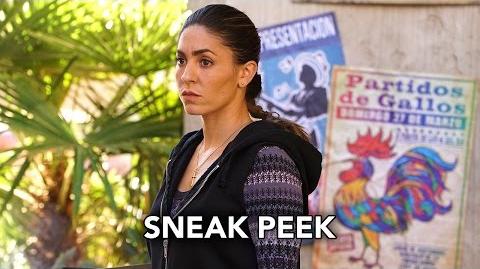 The Marvel Cinematic Universe Wiki has a collection of images and media related to Bouncing Back.