"When you took to the sky and spread your wings, you confirmed everything in the Book of Gibborim."
―Leslie Dean to Karolina Dean[src]

The Book of Gibborim is the worship text of the Church of Gibborim written by David Ellerh.

The Book of Gibborim was used in the worship services of the Church of Gibborim.[1] The desk where David Ellerh wrote the book stands on the old altar of the church.[2]

Karolina Dean began to study the book looking for answers after having removed her Church of Gibborim Bracelet and discovered her powers.[3] Having read it several times, Dean thought she was an angel. Later, Jonah revealed to her that Gibborim is actually an alien race.[4] Following Jonah's apparent death during the Battle at the PRIDE Construction Site, Dean reviewed her copy of the Book of Gibborim to find more information about her nature and quickly deduced from an excerpt that Jonah might have left a message for her.[5]

In an attempt to shut down the Church of Gibborim, Leslie Dean intended to get rid of all the copies of the Book of Gibborim she could find, an endeavor which deeply shocked her husband Frank, who had become a zealot for the cult.[6] 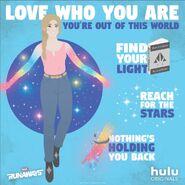