For each new episode of What If...?, please wait until a proper differentiative is decided prior to creating character articles.

View source
watch 02:24
Wiki Targeted (Entertainment)
Do you like this video?
Play Sound

"Hard to believe this little tube can cause so much damage."
"Now what?"
"Now we wait. We wait for the day to start. We wait for the skyscraper to be filled with thousands of people. Then we release the Zodiac."
―Baker and a member of his cell[src]

Baker is the leader of a terrorist cell.

Upon the discovery that the Zodiac weapon still existed, despite S.H.I.E.L.D.'s claim to have destroyed it, Baker and his terrorist cell executed a successful theft of the dangerous object.

Baker laid low for several weeks while formulating his plans for the Zodiac. During this time, a woman going by the name "Audrey" joined the ranks of his cell.

Upon finalizing his plans to release the Zodiac in the Willis Tower in Chicago, killing all within, Baker led a team to execute the mission. Posing as a cleaning crew, Baker and his men made their way to the tower's Skydeck shortly before dawn, where they prepared to release the Zodiac as the building filled with people for the day.

But before Baker's team could accomplish their mission, they were confronted by Captain America and Agent Brock Rumlow of S.H.I.E.L.D., who had been tipped off by "Audrey". Audrey, in truth, was actually Black Widow, who had infiltrated Baker's cell and determined his plans.

With defeat inevitable, Baker sought to escape with the Zodiac by jumping from the Skydeck, and landing safely by way of a personal parachute. However, Captain America was unwilling to let Baker escape with the Zodiac. He jumped off the Skydeck without a parachute and struggled with Baker in mid-air. Unwilling to die in the fall, Baker released the Zodiac to Cap and activated his 'chute. Captain America was snared in mid-air by Rumlow back on the Skydeck with a grappler arrow while Baker had escaped.[1] 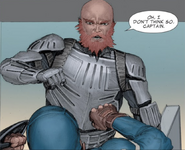