watch 02:03
Wiki Targeted (Entertainment)
Do you like this video?
Play Sound

Asgardian Wolves were a immensely powerful and ferocious breed of giant war wolves, one notable among them being Fenris.

One of the Asgardian Wolves, Fenris, served as a loyal companion to Hela during the expansion of Asgard around the Nine Realms until her death sometime after Hela's exile. Millennia after her death, Fenris was resurrected by Hela with the power of the Eternal Flame and put at her service during her rule over Asgard. However, Fenris was ultimately thrown into outer space to her death by the Hulk.[2] 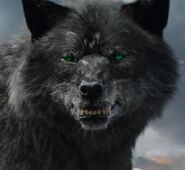 Fenris †
Add a photo to this gallery

Retrieved from "https://marvelcinematicuniverse.fandom.com/wiki/Asgardian_Wolves?oldid=1345468"
Community content is available under CC-BY-SA unless otherwise noted.