Arnim Zola's Camera and Monitor were video recording equipment used by HYDRA scientist Arnim Zola to record his experiments involving the power of the Tesseract.

In 1941, HYDRA scientist Arnim Zola was ready to perform his first experiment to harness the power of the Tesseract and used the camera and monitor to record the experiment. Before the experiment began, Zola positioned the camera to focus on the machine the Tesseract would be placed in. As he made adjustments to the camera, Zola's face appeared on the monitor as he informed HYDRA leader Johann Schmidt that he was being very cautious with his machines after he had been asked if he was ready to start.

As the experiment proceeded, the camera recorded as the Tesseract discharged a great burst of energy which flashed across the entire room. Both the camera and monitor were unaffected by the energy.

One year later, Zola continued to use the camera to record HYDRA’s experiments with the Tesseract’s power. One of Zola’s technicians was busy making adjustments to the camera as Schmidt arrived with three SS officers, Hutter, Roeder and Schneider to show them his Tesseract-powered advanced cannon.[1] 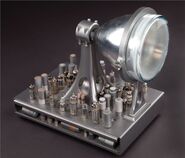 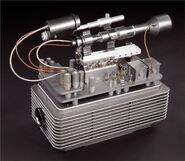 Retrieved from "https://marvelcinematicuniverse.fandom.com/wiki/Arnim_Zola%27s_Camera_and_Monitor?oldid=956741"
Community content is available under CC-BY-SA unless otherwise noted.