The character of Arkon grew up on popularity and a film was ordered to be filmed. The film was written by Megan McNichol and directed by Jake Martin. Eventually, the main role of the film was brought to life by Simon Williams. Along Williams, other actors such as Tommy Harper, Joel Marrow, Jimmy Ray Pickens and Mindi Martinez were part of the production.

Other staff involved included Erika Denton and Simon Hatt as producers, Tyson Weatherford as Director of Photography, Graham Ready as Production Designer, Simona Paparelli as an Editor, and Alexander Gaeta as a Composer. [1] 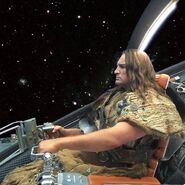 Retrieved from "https://marvelcinematicuniverse.fandom.com/wiki/Arkon_(film)?oldid=1070234"
Community content is available under CC-BY-SA unless otherwise noted.