Marvel Cinematic Universe Wiki
Register
Don't have an account?
Sign In
Advertisement
in: Books, Ant-Man and the Wasp Merchandise

Ant-Man and the Wasp: The Heroes' Journey

Ant-Man and the Wasp: The Heroes' Journey

This exciting junior novel tells the story of Ant-Man and his Super Hero partner the Wasp through the Marvel Cinematic Universe. Beginning with Ant-Man (2015), and moving through Captain America: Civil War (2016) the book includes original "bridge" material that stems from the close of Civil War until the adventures of Ant-Man and the Wasp.[1] 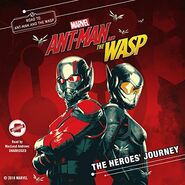