"This is your chance. The chance to earn that look in your daughter's eyes, to become the hero that she already thinks you are. It's not about saving our world. It's about saving theirs."
"Damn, that was a good speech."
"Scott, I need you to be the Ant-Man."

Ant-Man is a 2015 superhero film, based on the Marvel Comics superhero of the same name. It is the twelfth film in the Marvel Cinematic Universe, and the sixth and final installment of Phase Two. The film was released on July 14, 2015 internationally and on July 17, 2015 in the United States.

The next evolution of the Marvel Cinematic Universe brings a founding member of The Avengers to the big screen for the first time with Marvel Studios' "Ant-Man." Armed with the astonishing ability to shrink in scale but increase in strength, master thief Scott Lang must embrace his inner-hero and help his mentor, Doctor Hank Pym, protect the secret behind his spectacular Ant-Man suit from a new generation of towering threats. Against seemingly insurmountable obstacles, Pym and Lang must plan and pull off a heist that will save the world.[1]

In 1989, Hank Pym resigns from S.H.I.E.L.D. after discovering Howard Stark's attempt to replicate his own shrinking technology, which Pym believes is very dangerous and vows to suppress it. In the present, Pym's estranged daughter, Hope van Dyne, and protege, Darren Cross, have forced him from his own company, Pym Technologies. Furthermore, Pym is more devastated when Cross unravels his own project; an advanced shrinking suit named the Yellowjacket Suit, based on Pym's original technology.

In the present day, Scott Lang has been released from San Quentin State Prison, after serving three years for burglarizing a former employer. He reunites with his former cellmate, Luis, and his two other partners Kurt Goreshter and Dave, who offer him a position in a burglary; however, Lang exploits his intention about going straight. Furthermore, he learns that his ex-wife has gotten engaged to a police officer, Jim Paxton. His wife also reveals that he cannot see their child anymore if he does not provide child support.

Relentless, and hopeless, Lang inadvertently accepts the burglary job offered by Luis, when he is unable to strike up a job because of his negative criminal records and background. Lang confidentially infiltrates the house where he is supposed to break into, and cracks open a safe, and finds something which he refers to as an "old motorcycle suit". He takes it to his apartment after escaping. He starts toying with it and wears the suit. Triggering a button, he inadvertently shrinks down to the size of an insect and struggles to return to his original size. Terrified by this enigmatically frightening experience, he attempts to return it back to the house where he smuggled it from, only to be discovered by the police, and arrested. Pym, the owner of the house which Lang broke into, poses as a lawyer and smuggles the Ant-Man Suit to Lang's cell to help him break out. Although confused, Lang wears the suit and escapes the prison with the help of a group of ants.

Lang discovers that Pym manipulated him through Luis into stealing the suit as a test, and wants Lang to become the new Ant-Man and steal the Yellowjacket suit from Cross, which Pym considers as extremely dangerous equipment, literally capable of mass destruction. Pym requests Van Dyne to spy on Cross, and she does so, although resenting her father for their strained relationship and not saying anything about her mother and also not letting her stop Cross. Meanwhile, Lang is trained by Van Dyne and Pym to perfectly control and manipulate the Ant-Man suit that additionally supplies superhuman strength, while teaching him to control ants.

Pym sends Lang to a very risky mission, where he steals a device from the Avengers Compound, originally one of Stark Industries warehouses, that eventually leads to a fight between Lang and Falcon. Later, Pym in frustration, tells Hope the truth about the death of her mother, Janet van Dyne; her mother was the counterpart of Pym's Ant-Man superhero identity, the Wasp, who sacrificed herself to prohibit a Soviet nuclear launch missile to be activated; in the process, she disappeared into a subatomic Quantum Realm. He admits that he does not want the same to happen to Hope; then the two reconcile.

Cross perfects the Yellowjacket suit and invites Pym to the unveiling. While the congregation ceremony of the Yellowjacket suit is taking place, Lang, in the Ant-Man suit, along with his crew and a swarm of ants, infiltrates the building. Planting explosives and sabotaging all the servers, Lang is prepared to steal the Yellowjacket Suit; however, he is captured by Cross who was expecting this. Cross sells both the Ant-Man and Yellowjacket suits to the HYDRA and the Ten Rings. Lang breaks free from his trap, fights the HYDRA agents and chases after the escaped Cross, though Mitchell Carson escapes with Cross's unstable formula amidst the chaos. Then, the planted explosives planted on Cross's unstable Pym Particle formula detonate, imploding the building into the Quantum Realm.

Cross dons the Yellowjacket suit. Lang traps Cross in a bug zapper, but before he can sabotage his suit, he is tased and arrested by Paxton. Cross escapes, and holds Lang's daughter, Cassie, as a hostage, to lure Lang to him. They both fight once again but as a last effort, Lang shrinks to a subatomic size to finally penetrate and sabotage the Yellowjacket suit. They both shrink uncontrollably in the nothingness of the subatomic quantum realm, with Cross imploding due to his suit being damaged by Scott, who smashed through the suit's mechanisms and circuits as he turned subatomic. Scott, fighting unconsciousness and after hearing Cassie calling for him, finds the will to escape and puts a disc with enlarging Pym Particle formula inside the suit's regulator and switches it back on, successfully reverting to his original size.

Witnessing the heroism of Lang, Paxton covers up for him and wriggles him out of serving time. Scott remembers nothing of his experience in the Quantum Realm, with Pym believing the human mind might not be able to process it. Seeing that Lang survived the Quantum Realm, Pym wonders if his wife is still alive. Months later[2], Luis informs Lang that the Avengers are looking to recruit him, by the suggestion of Wilson.

After Lang's departure, Pym congregates the upgraded prototype of the Wasp Suit to Hope, offering it to her. To which she replies, "it's about damn time". A year later, in Berlin, Steve Rogers and Wilson have found Bucky Barnes. Unable to contact Tony Stark because of the "accords" prohibited him, Steve says that they are on their own but Wilson states that "he knows a guy".

In April 2006, Marvel Studios hired Edgar Wright to direct Ant-Man as part of the company's first slate of independently produced films, buoyed by a $525 million revolving film-financing facility. Wright also signed to co-write the screenplay, based on a comic book series about an electronics expert who can shrink to the size of an insect and communicate with ants via a telepathic/cybernetic helmet, with his writing partner Joe Cornish and to co-produce the film with his Big Talk Productions partner, Nira Park.

Wright and Cornish originally wrote a treatment for Artisan that focused on Scott Lang as a burglar. Artisan, looking for a family-oriented movie, passed on the script. A few years later when Marvel executives Kevin Feige and Avi Arad asked if Wright was interested in writing a script on any of the Marvel titles, Wright offered the Ant-Man script.

In February 2007, Wright reported that the film was in a holding pattern while they worked on revising the script. At that time casting had not been started.

In March 2008, Wright told Empire magazine that a second draft of the script was being written. Known for being a comedic writer, the director noted that the film would not be overtly comedic, but that it would be "more of a full-on action adventure sci-fi film but with a comedic element," and that it would not be a spoof. He confirmed that the film portrays both Hank Pym, as the original 1960s character from "Tales to Astonish", and Scott Lang as his 1980s/1990s successor in the Ant-Man role.

Wright said the story is very character-driven, and a new twist on an origins story. As part of his writing he researched nanotechnology.

In May 2012, a "teaser" image of the movie was presented via Twitter by writer and director Edgard Wright. Feige stated as well that the movie was "as close as it’s ever been".

On January 25, 2013, Kevin Feige confirmed that the film will be a part of Phase Three of the Marvel Cinematic Universe and will be the film to begin the 3rd phase.

In October 2013, Wright tweeted a photograph from the production of the June 2012 test reel with the caption, "Now I'm back in LA, it's high time to finish a little something I've been working on".

On December 18, 2013, Paul Rudd was cast as the lead character, but it was not revealed which version of Ant-Man he will portray.

On January 13, Michael Douglas was cast as Hank Pym and Rudd was confirmed to play Lang. Also in January, Disney changed the release date once again, moving the film up to July 17, 2015, from July 31, 2015.

On February 6, 2014, Evangeline Lilly was announced to be in talks to play the female lead in the film. It was also confirmed that Michael Peña had been cast in an unspecified role.

On May 23, 2014, Edgar Wright announced he would be leaving as director of Ant-Man due to creative differences with Marvel. Variety reported that Marvel knew who they wished to have as a replacement but had not yet begun negotiations.[5]

On May 30, 2014, Adam McKay was asked by Marvel Studios to direct Ant-Man, but he decided to focus on other projects. [6]

On June 7, 2014, Peyton Reed was announced as the new Director of the film. Also in June, Corey Stoll was revealed to be playing the antagonist Darren Cross.

On January 2nd, 2015, Marvel announced that the first trailer would air with the premiere of Agent Carter in a miniature video. 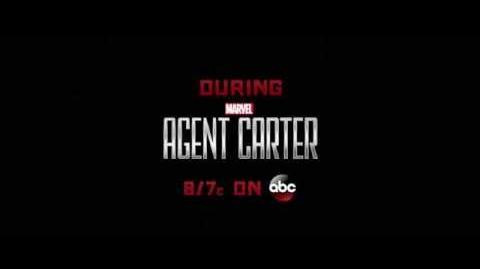 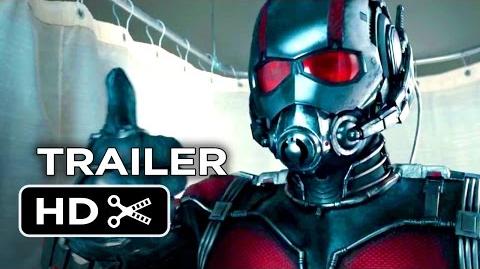 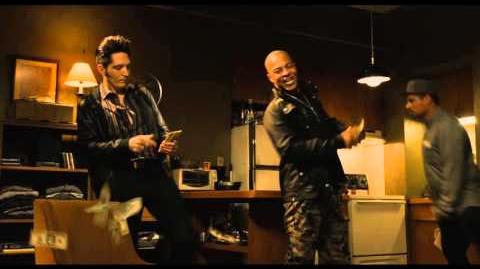 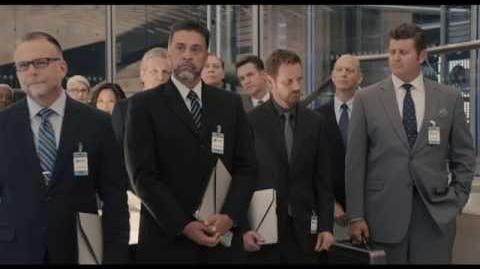 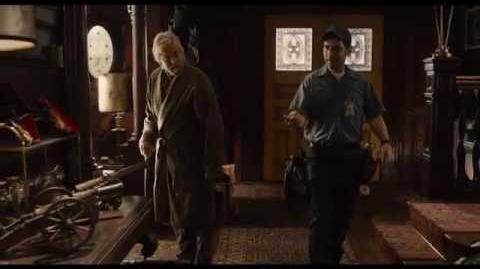 The Marvel Cinematic Universe Wiki has a collection of images and media related to Ant-Man (film).