"I bet the trees in your 'hood grows jobs and scholarships. Where I'm from, we don't got too many trees, homie."
―Andre Compton to Alex Wilder[src]

Andre Compton was a member of the Crips. He was wounded during the Kidnapping of Alex Wilder, which Geoffrey Wilder used to bring him to PRIDE so that Compton could be sacrificed in order to restore Jonah.

"You got what you needed from his cell?"
"Download complete."
―Darius Davis and Andre Compton[src]

As a member of the Crips, Andre Compton took part to an assault led by Darius Davis in order to take over the PRIDE Construction Site managed by Geoffrey Wilder Construction Inc. so that Geoffrey Wilder would come and confront the gang. When Wilder arrived, Compton searched him and confiscated his phone, pretending that they did not want the negotiation to be recorded. Compton then watched the argument between Davis and Wilder, secretly hacking Wilder's phone.

The Crips then let Wilder go after he threatened to destroy Davis and the Crips. Compton got in a car with Davis and announced that he had successfully downloaded the data from Wilder's phone, enabling Compton to track him down and monitor his activities.[3]

"How'd you guys find me, anyway?"
"We called your dad's phone, fool."
"No, his security's tight. He'd know if his cell showed any signs of being compromised."
"All I did was put a modified EEPROM into his phone signal and snag the serial number. Five minutes later, his data was mine."
―Alex Wilder and Andre Compton[src]

Compton assisted Darius Davis when the Crips attempted to kidnap Alex Wilder in order to blackmail his father Geoffrey. At first, Compton accompanied Davis and Wilder to Nana B's Residence, where Davis explained to Alex how he had served a jail sentence for a crime Geoffrey had perpetrated. They then went to a park, waiting for Geoffrey to come with 1,000,000 dollars in exchange for Alex. While they waited, Compton explained to Alex how he had hacked into Geoffrey's phone to find him.

However, Geoffrey arrived with a couple of LAPD officers, which led to a gunfight with the Crips. Compton aimed at Geoffrey with his gun, but he was shot from behind in the shoulder by Alex, who had stolen a gun from Geoffrey. Compton fell on the ground and Geoffrey leaned on him, only to be distracted as Davis had taken Alex hostage once again.[4]

"Cat, I got a live one, but I don't think he'll last for long. Get PRIDE together."
―Geoffrey Wilder to Catherine Wilder[src]

Still heavily wounded and bleeding, Compton remained with Geoffrey Wilder, who put him in his car. As Alex Wilder returned since he had been rescued by the Runaways, Compton begged him for help and Alex gave him his jacket so he could pressure the wound. Geoffrey then ordered Alex to leave as Compton was taken to the Church of Gibborim Executive Office. There, the gathered members of PRIDE pretended that they would heal him, while they actually sacrificed him in order to restore Jonah.[4]

"I'm assuming the kid Geoffrey pulled off the streets was depleted when we converted him."
―Jonah to Victor Stein[src]

Although Compton's sacrifice enabled Jonah to be revived, the fact that he had been wounded immediately before the ritual was not without consequences. Indeed, Jonah was only able to use his powers once during a confrontation against the Runaways before his body once again began to decay due to Compton's living energy being insufficient to sustain such a use of Jonah's Gibborim related powers, forcing Jonah to ask Victor Stein to build a new Dematerialization Box.[5]

As a member of the Crips, Andre Compton was not afraid of committing various felonies in order to survive. He was aware that given his origins, he would not have as much opportunities to progress in life as the likes of Alex Wilder, meaning that he had to struggle and fight in the illegality so that he could become someone important. Compton thought that the wealthy people of Los Angeles were prone to despise those of poorest extraction, despite the fact that they could be as skilled as anyone else.

"What, you think the only people good with tech lives in Brentwood?"
―Andre Compton to Alex Wilder[src] 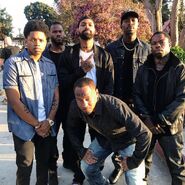 BTS
Add a photo to this gallery

Retrieved from "https://marvelcinematicuniverse.fandom.com/wiki/Andre_Compton?oldid=1046655"
Community content is available under CC-BY-SA unless otherwise noted.