"I had it under control. She was coming around, and then Yo-Yo killed her."
"No. I just saved the world."
―Quake and Yo-Yo Rodriguez

All Roads Lead... is the eighteenth episode of the fifth season of the television series Agents of S.H.I.E.L.D..

The team must find a way to stop Ruby before the prophesied chain reaction that can destroy the Earth is put into motion.

Glenn Talbot, who has been subjected to the Faustus method by HYDRA, begins to pursue his secret mission and joins the Lighthouse's control room, where he identifies and pauses the video feed associated to the entrance of Polly's and Robin Hinton's room. He is then found by Alphonso Mackenzie, who apologizes to him for not having located and released the General earlier and advises him to take some more rest.

S.H.I.E.L.D. tracks down the signal sent by the deactivation of the Sleeper Mechs in the HYDRA Preparatory Academy. Both Daisy Johnson and Melinda May decide to leave the Lighthouse and raid the HYDRA base while Phil Coulson, Alphonso Mackenzie and Deke Shaw remain to work on the new thrusters the Zephyr One was upgraded with in the future in the case the mission goes wrong. Before they depart, Coulson compliments Johnson about her leadership although she is aware that she still has much to learn. Coulson then unsuccessfully tries to talk with May about her earlier declaration of love.

While they are working, Mackenzie confronts Shaw about his attraction towards Johnson, which he admitted after his surgery. Shaw tries to deny it but eventually gives up and asks for advice into declaring his feelings. However, both Coulson and Mackenzie turn out to be not very helpful as they struggle with their own relationships, prompting Shaw to resort to the way people did in his time: laying a lemon on Johnson's bunk.

Talbot goes into the Hintons' empty room and searches through Robin's drawings until both Polly and Robin return. Talbot introduces himself and begins to ask Robin about her gift. Feeling that something is not right, Polly tries to have Talbot leave the room, but Talbot insists on taking Robin to see people outside the Lighthouse. As Polly refuses, Talbot suddenly attacks her and renders her unconscious. He then takes Robin with him and attempts to leave the base.

However, Coulson, Mackenzie and Shaw found out about Talbot's actions. While Shaw remains with Polly, Coulson and Mackenzie find Talbot and Robin. Coulson convinces Talbot to release Robin, who is taken away by Mackenzie, but then Talbot proceeds to point his gun on himself, considering suicide the only option for not falling to the HYDRA brainwashing. Nevertheless, Coulson uses the Faustus method to have Talbot aiming at him instead, earning enough time for Mackenzie to incapacitate Talbot with an I.C.E.R.

In the HYDRA Academy, Hale, who had been locked up by her daughter Ruby Hale, is released by her aide Candice Lee, who informs her that Ruby and Werner von Strucker left to find the Particle Infusion Chamber. They go and visit Carl Creel, who keeps hearing the voices of Franklin Hall and Ian Quinn arguing in his head. As Hale and Lee worry about the effects of a complete infusion with Gravitonium on Ruby given what Creel experiences from having simply touched the element, Creel loses his temper and demands to be ridden of the voices. Unable to bear them, Creel absorbs the properties of a concrete wall and bangs his head on it, hoping to make the voices get out.

While Hale and Lee discuss their options, Quake and May successfully attack the HYDRA Academy. Hale, who understands the gravity of the situation, immediately surrenders and requests S.H.I.E.L.D.'s assistance in order to stop her daughter. Quake and May reluctantly agree and take Hale to the Zephyr One. Before arriving on site, Quake and Hale talk about Ruby and Quake even suggests that Ruby could become a S.H.I.E.L.D. agent with proper training. Quake requires Hale's assistance into talking Ruby down if necessary.

Meanwhile, in the HYDRA Herefordshire Facility, Leo Fitz works on repairing the infuser of the Particle Infusion Chamber while Ruby playfully threatens Jemma Simmons. Fitz convinces Ruby to let Simmons help him and they try to warn Ruby about the consequences of using the Chamber, but to no avail. While Fitz and Simmons discretely plan to work as slowly as possible to enable backup to come, von Strucker informs Ruby that he reactivated the Sleeper Mechs to find potential intruders. One android finds Yo-Yo Rodriguez, who, despite her pain, manages to destroy it.

Ruby and von Strucker grow wary of Fitz's and Simmons' slow work. As they realize they did not repair the infuser properly, Ruby violently attacks Fitz and threatens to kill Simmons the next time they make a mistake. Eventually, Fitz and Simmons correctly repair the infuser, enabling von Strucker to prepare the machine for Ruby. Although Fitz and Simmons attempt to talk Ruby out of infusing herself with the Gravitonium, she dismisses their warnings and enters the Chamber.

Von Strucker activates the Chamber, but the infusion process turns out to be incredibly painful for Ruby, who screams in horror. Von Strucker blames Fitz and Simmons, but Hale arrives with Quake and May and orders him to shut down the machine. Once the process is paused and the Chamber opens, Ruby regains consciousness and slowly levitates out of the Chamber. She falls on the ground and von Strucker tries to comfort her as Ruby also hears the voices of Quinn and Hall arguing. Unable to control her newfound gravity manipulation abilities, Ruby accidentally kills von Strucker.

Ruby is progressively driven insane because of the voices. She initially attacks Fitz and Simmons, who manage to escape when Hale temporarily calms her daughter down. Ruby then violently confronts Quake and attacks her, although Quake insists that she is not here to harm her and understands what Ruby is experiencing as she also had great trouble in mastering her own powers at first. Hale and Quake seemingly manage to calm down Ruby a little bit, but then Rodriguez arrives and recognizes Ruby as the one who cut off her arms. Seeking revenge, Rodriguez slits Ruby's throat with her Chakram.

As Hale desperately mourns the loss of her daughter, Quake blames Rodriguez for killing Ruby, although Rodriguez claims that she saved the world in the process. However, the Gravitonium in Ruby's body manifests itself one last time, unleashing a powerful outburst which knocks everyone out. When they regain consciousness, they realize that Hale is gone. Indeed, she joined Qovas in the Confederacy meeting room. Hale informs Qovas that she knows where the Gravitonium he is looking for has been taken, prompting Qovas to consider attacking S.H.I.E.L.D. without Hale objecting. 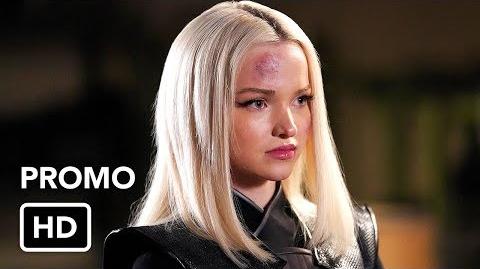 The Marvel Cinematic Universe Wiki has a collection of images and media related to All Roads Lead....