< Alistair Fitz
View source
watch 01:36
We're Getting Mutants in the MCU - The Loop
Do you like this video?
Play Sound

"We don't buckle to guilt or womanly sentiment. Everyone needs the strap across their back now and again. Teaches respect. You know that. You felt it. And look where it's gotten you."
―Alistair Fitz to Leo Fitz[src]

Alistair Fitz was a virtual recreation of the real-world person of the same name inside the Framework. Fitz worked as a key advisor for his own son, Leo Fitz, one of the heads of HYDRA, however he was shot and killed by Jemma Simmons while refusing to betray his own son and not handing him over to Simmons.

"I've been nothing but a good father."
"You've poisoned his mind."
"I did no such thing. I love that child. And I raised him to be the man that he is today."
―Alistair Fitz and Jemma Simmons[src]

Contrary to what happened in the real world, Alistair Fitz took his son Leo with him when he left his wife and raised him himself. As a result, Leo became a ruthless and cold person, learning to despise regrets and guilt, feelings that Fitz considered to be "womanly".[1]

"Honestly don't know what kind of man I'd be without you, father."
"That's why I'm here, son."
―The Doctor and Alistair Fitz[src]

Fitz joined HYDRA and soon reached a high-ranking position within the organization which now ruled over the world. He worked closely with his son Leo Fitz, advising him and showing pride at the fact that his son, known as the Doctor, had become second-in-command in HYDRA and Madame Hydra's lover.

Fitz informed the Doctor that a security breach within HYDRA had been discovered, possibly endangering the organization and especially the Project Looking Glass. While doing so, he noticed that his son seemed to be troubled and invited him to share a cup of tea. Fitz and his son then discussed the latter's position within HYDRA and when the Doctor started questioning his own actions like when he killed Agnes Kitsworth, Fitz quickly chastised him and told him he had done the right thing. Afterwards, Fitz investigated on the security breach.

When the Patriot was killed following the Infiltration into the HYDRA Enlightenment Cultivation Center, Fitz toasted to this HYDRA victory over S.H.I.E.L.D. with his son and Madame Hydra.[1]

"We lost seven agents."
"I don't care if you have to send 100 agents to their deaths. They broke her spine. I want them dead!"
"Don't you snap at me, boy. If I wanted you hysterical at every setback, I would have left you with your mother."
―Alistair Fitz and The Doctor[src]

When Melinda May and Daisy Johnson escaped from the Triskelion, Fitz came to see Madame Hydra who had been severely injured in the process. While The Doctor was enraged at the sight of his lover in poor condition, Fitz told him that he had to lead HYDRA in her place while he led the chase for the rebels. He later received word that May and Johnson had been spotted and sent a team of HYDRA operatives to capture them. However, the operation failed since May and Johnson had reinforcements coming their way.

Fitz reported the rebels' escape to his son, who quickly got angered at him before Fitz chastised him, telling him that his reaction was unworthy of the education Fitz provided. The Doctor calmed down and told his father that he could not accept any failure, even from his father. Still willing to capture the fugitives, Fitz went to interrogate Holden Radcliffe who had been captured by HYDRA and could be a lead to the S.H.I.E.L.D. resistance. However, Radcliffe refused to cooperate, even after Fitz beat him up. All he could learn was that Radcliffe had communicated with Johnson while she was imprisoned in an adjacent cell, an information that he reported to his son. Fitz told the Doctor that Radcliffe was willing to die, to which the Doctor responded that they could give him a reason to live.[2]

"The fugitive is here! Bring all your men!
"You stupid man! You're going to get us all killed!"
"The only one dying today is you!"
―Alistair Fitz and Jemma Simmons[src]

While reading at home, Fitz was confronted by Jemma Simmons, who threatened him with a gun. Simmons blamed Fitz for Leo Fitz's evil personality in the Framework, but Fitz kept telling that he was proud of his son's strong achievements. Simmons then forced Fitz to call his son and to ask him to come to the house alone. However, Fitz refused to obey and told his son that one of the subversives that HYDRA was looking for was with him. He overpowered Simmons and tried to neutralize her, but was eventually shot and killed by Simmons, who quickly fled. Afterwards, Fitz's body was found by the Doctor and Holden Radcliffe, and the former swore to exact revenge on Simmons.[3] His corpse was deleted along with everything else in the Framework after Aida decided to shut it down in her rage.[4]

"My father was disapproving. The things I did to earn his respect... they left scars."
―Leo Fitz to Kasius[src]

Unlike his counterpart in the real world, the Framework version of Alistair Fitz was loving and supportive to his son Leo, respected his vast intellect, and took him with him when he left his wife when his son was ten. However, the real-world Alistair Fitz's other characteristics remained, including his cruelty and ruthlessness, and his dismissiveness of those he considered to be inferior than him; as a result, Leo's personality in the Framework was shaped by a virulent brand of brutality and toxic masculinity that, in the real world, he was barely exposed to and did not see as a positive influence.

Fitz approved of HYDRA's brutal persecution of Inhumans, telling his son that he considered his treatment of them to be "protecting the human race", and did not think it mattered that Leopold had killed Agnes Kitsworth when his son told him he believed she might have been an enemy of the state. Fitz also had a temper, often shouting at his son when he displayed weakness; his conversation with Leo about how "[he felt] a strap across [his] back now and again" also suggested he was physically abusive to him when he was younger. He was also willing to brutally beat Holden Radcliffe with his bare hands when the latter refused to give him information, and showed no remorse for the fact afterwards during his conversation with his son. Fitz believed in strength and discipline, but expressed these characteristics to a negative extreme, and considered things such as compassion and remorse to be signs of weakness. He also considered doubt and regret to be "womanly sentiments", suggesting that he was somewhat misogynistic, and immediately assumed that the Doctor's regret over killing Agnes Kitsworth had something to do with a romantic relationship when it did not. Fitz was loyal to HYDRA and fought for them until the end; believing in their fascist ideals up until his death at the hands of Simmons. 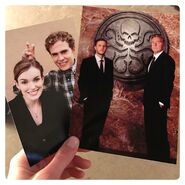