A list of trivia related to Agents of S.H.I.E.L.D.

References to the Marvel Cinematic Universe 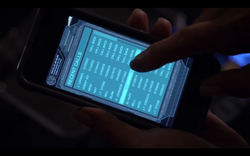 As The Walt Disney Company is also the owner of Marvel Studios, some references to previous Disney works are made in Agents of S.H.I.E.L.D.:

Retrieved from "https://marvelcinematicuniverse.fandom.com/wiki/Agents_of_S.H.I.E.L.D./Trivia?oldid=1332380"
Community content is available under CC-BY-SA unless otherwise noted.