What We're Fighting For

"We are not agents of nothing, we are agents of S.H.I.E.L.D., and that still carries weight! That has to carry weight! After everything we've been through, that carries weight!"
―Phil Coulson[src]

Fresh from his role in the summer's box office smash The Avengers, Agent Phil Coulson returns to the worldwide law-enforcement organization S.H.I.E.L.D.. He puts together a small, highly trained, team of agents to tackle the cases that haven't been classified yet, the new, the strange and the unknown.

Prepare for an epic adventure that showcases the hope and wonder of the human spirit. This is a world of superheroes, aliens and the unusual – of action, spectacle and world-spanning stories. The show will speak to the human condition through the lens of our very human, non-powered S.H.I.E.L.D agents – that together we are greater than we are apart, and that we can make a difference in the world.

After helping to thwart HYDRA, Coulson was appointed as Director, and tasked with rebuilding the agency. This won't be an easy job to accomplish with the majority of S.H.I.E.L.D. agents either killed, secretly working for HYDRA or free agents.

Agent Melinda May, expert pilot, martial artist and long-time friend, will continue to look after Coulson in the wake of the mysterious etchings he's been carving into walls. What do these etchings mean, and can Coulson be trusted? Grant Ward, highly trained in combat and espionage, was found to be a HYDRA mole and a traitor to S.H.I.E.L.D. and locked up away from the world and his former teammates.

But this isn't the last we've seen of him... After being left in the middle of the ocean by Ward, Agent Leo Fitz, brilliant engineer, and Agent Jemma Simmons, genius bio-chemist, found a way to escape their watery grave. But all did not go well for Fitz, who was left in a coma and may never regain his full cognitive functions; a devastating blow to Simmons.

And computer hacker Skye, now a full-fledged S.H.I.E.L.D. agent, discovered her origins as an 0-8-4 -- an object of unknown origin -- and that her parents were considered "monsters." Could Skye have darkness lying dormant inside of her? Also joining Coulson's core team is Lance Hunter, a dashing mercenary sharpshooter with a quick wit. Since he didn't rise up through the ranks, does he have an ulterior motive for helping out the team? Who can Coulson trust?

Marvel’s Agents of S.H.I.E.L.D. returns for an action-packed third season, with Director Phil Coulson and Agent Daisy Johnson leading the charge as S.H.I.E.L.D. searches the world for more powered people in the aftermath of their epic battle with Jiaying and her army of Inhumans. However, Coulson and the team soon find out that they are not the only group looking for these new Inhumans.

Many months after their war with a rogue group of Inhumans, the team is still reeling. Coulson is again trying to put the pieces of his once revered organization back together while also dealing with the loss of his hand. His confidante and second in command, Agent Melinda May, has yet to return from an impromptu vacation with ex-husband Andrew; deadly superspy Agent Bobbi Morse is recovering from her traumatic torture at the hands of Grant Ward; Fitz is obsessed with discovering the truth behind the mysterious disappearance of Simmons; and all are on high-alert for the next move from Ward and HYDRA.

Ever since the existence of superheroes and aliens became public knowledge after the Battle of New York, the world has been trying to come to grips with this new reality. Coulson assembled a small, highly select group of Agents from the worldwide law-enforcement organization known as S.H.I.E.L.D.. S.H.I.E.L.D.’s mission: to protect those who cannot protect themselves from threats they cannot conceive.

But bigger threats loom ahead, setting the stakes even higher for the Agents, including the spread of Terrigen, an alien substance that unlocks superhuman abilities in select individuals; the emergence of new Inhumans who cannot yet control nor understand their powers; the rise of a new government organization that will go toe-to-toe with S.H.I.E.L.D.; the unknown properties of the massive alien Kree Monolith, which has taken one of their own; and the constant threat of a rebuilt HYDRA terrorist organization under S.H.I.E.L.D. traitor Grant Ward, who is making it his personal mission to take down Coulson and S.H.I.E.L.D.

New faces, both friend and foe, will join the series, including the no-nonsense, highly skilled and somewhat mysterious leader of the ATCU, her intimidating partner, Luther Banks, Lash, a monstrous Inhuman whose loyalties remain ambiguous, and new Inhuman Joey, who is struggling to harness his newfound abilities, among other surprising characters.

Coulson, with the help of Daisy and Mack, will work to slowly assemble a team that is stronger than ever before, combining the highly skilled agents of S.H.I.E.L.D. with powered individuals in the hopes of protecting the innocent in a world where the balance of power is ever-shifting, and new dangers are constantly emerging.

In the aftermath of their journey to another planet, Director Phil Coulson and the rest of the team were driven more than ever to put an end to the HYDRA organization. Little did they know that they were up against the deadliest threat they've ever faced--an extremely powerful Inhuman, Hive, who was transported back from Maveth in the body of their worst enemy, Grant Ward. The team was able to thwart and kill Hive and take down HYDRA, but they are all still mourning the death of fellow agent and Inhuman, Lincoln Campbell.

In light of the Sokovia Accords, and with HYDRA obliterated, S.H.I.E.L.D. has been legitimatized again and no longer needs to operate in the shadows. Since the world presumes that Coulson is dead, the organization needed a new Director to be the face of the organization.

Coulson finds himself back in the role as an agent and teamed with Mack, and together they are tasked with tracking down and confirming the presence of enhanced people, aka Inhumans. They have been trying to track down and capture Daisy, aka Quake, who has gone rogue in an attempt to atone for sins from the past.

But with the world believing that Daisy is a dangerous outlaw who has taken down banks and bridges, the new Director has no qualms about taking her down for good.

Agent May is tasked with training specialist strike teams and Fitz and Simmons have taken a big step forward in their relationship. But with Simmons’ new promotion as Special Advisor to the Director in Science and Technology, Fitz, as well as her former team members, finds it hard to confide in or trust her since she's now the Director's confidant.

On the heels of their encounter with Ghost Rider, their strangest phenomenon yet, the agents of S.H.I.E.L.D. suddenly find themselves up against a myriad of new and ongoing threats: The anti-Inhuman Watchdogs are gaining political influence with Senator Nadeer, and uniting behind a mysterious benefactor. Meanwhile, unbeknownst to the team, Aida has kidnapped Agent May and replaced her with a Life Model Decoy. Aida's evil plans for May and the team remain a mystery.

On the heels of their encounter with Ghost Rider and battling the Watchdogs to their highest ranks, the agents of S.H.I.E.L.D. find themselves in their most mind-bending mission yet. The heroes have been plugged into a virtual reality known as the Framework, created by Dr. Radcliffe and Fitz. They awake to find themselves in an unrecognizable world – a world in which HYDRA reigns supreme. What will become of the team as they make their way through this strange new landscape? What friends and foes will they face? And ultimately, will they ever escape and return to their real lives?

Agent Coulson and the team escaped LMD, Aida’s Framework and awakened in the real world. Little did they know that Aida was now fully human – and with multiple Inhuman abilities – with the dangerous notion that, with Fitz by her side, she could change the world. After defeating her with the aid of Ghost Rider, the team went out for a celebration but were interrupted by a mysterious man who rendered them frozen. The next thing we see is Coulson onboard a ship... in space.

Coulson will discover that some, but not all, of his S.H.I.E.L.D. colleagues were taken with him and placed onboard the ship. As they come in contact with some of the vessel's inhabitants, it becomes abundantly clear that something has gone terribly awry, and the team will need to figure out their role and delve deeper into this nightmarish mystery to try to right what has gone incredibly wrong.

Last season, the team leaped forward in time to a dystopian future they soon realized must be prevented. While facing multiple timelines and new enemies from faraway planets, they found family, friends, teammates and the courage to pull off their biggest challenge yet.

Their next challenge? Coming to grips with the knowledge that bending the laws of space and time may have saved the planet, but it couldn't save Fitz or Coulson.

Coulson and the Agents of S.H.I.E.L.D. are thrust backward in time and stranded in 1931 New York City. With the all-new Zephyr set to time-jump at any moment, the team must hurry to find out exactly what happened. If they fail, it would mean disaster for the past, present and future of the world.

In October 2012, during New York Comic Con, Joss Whedon, Kevin Feige, and Clark Gregg announced that Gregg would be reprising his role as Phil Coulson in a S.H.I.E.L.D. television series.[1]

In April 2013, ABC announced that the series would be titled Marvel's Agents of S.H.I.E.L.D.. Disney CEO Bob Iger greenlit the series after watching Marvel One-Shot: Item 47.[2]

Joss Whedon stated: "It's new characters. It needs to be its own thing. It needs to be adjacent [to the Marvel Cinematic Universe], but you don't want to do a show where you're constantly going, 'Iron Man just left, but he was totally here a minute ago.' You want them to do their own thing. What does S.H.I.E.L.D. got that the heroes don't have? To me, it's that they're not superheroes. But they live in that universe. Even though they're a big organization, that makes them underdogs and that's interesting to me."[3] 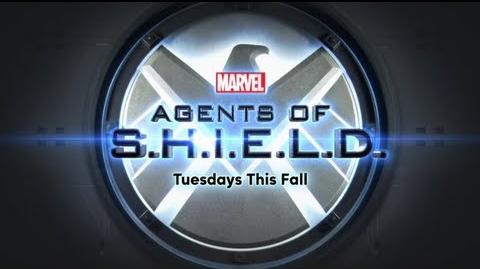 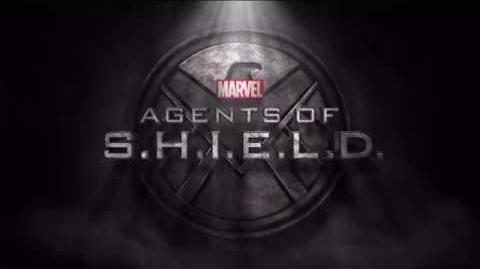 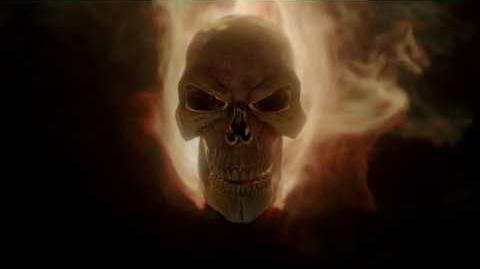 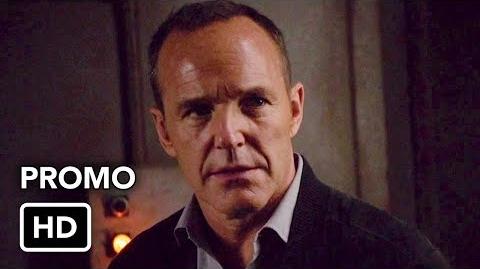 Marvel's Agents of SHIELD Season 5 "Not on Earth" Promo (HD) 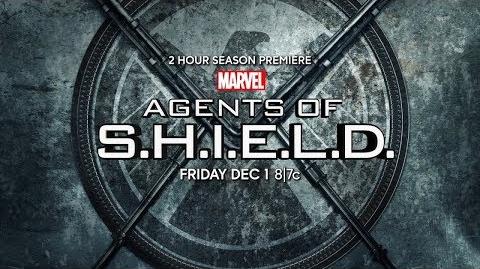 The Marvel Cinematic Universe Wiki has a collection of images and media related to Agents of S.H.I.E.L.D..

The Marvel Cinematic Universe Wiki has a collection of quotes related to Agents of S.H.I.E.L.D..