A Hen in the Wolf House

A Hen in the Wolf House

"Right now HYDRA's looking for a spy within their ranks. I wonder what would happen to Agent Simmons... if this were to fall into the wrong hands."
―Raina to Phil Coulson

A Hen in the Wolf House is the fifth episode of the second season of the television series Agents of S.H.I.E.L.D..

Coulson's team is up against the beautiful and deadly Bobbi Morse--Security Chief for HYDRA. Meanwhile, Skye's Father forces Raina to reunite him with his daughter at any cost.

At the wedding of Pete and Mariah Leitner, the place is filled with Pete's friends and colleagues from the United States Navy as a toast is given by Schneider. The wait staff serves champagne and will not allow guests any other drink. After the toast the guests who drank the champagne start reacting similarly to victims who have touched the obelisk. Some of the victims die, while others are hospitalized.

The wait staff was HYDRA agents working for Sunil Bakshi, attempting to replicate the effects of the Obelisk.

Sunil Bakshi orders Jemma Simmons and Kenneth Turgeon to attend a meeting Daniel Whitehall was having with his top scientists. Lingenfelter explains that she had skin samples from a waitress who had been petrified, but she failed at duplicating the powers completely. Whitehall asks for suggestions from Simmons, to Turgeon's jealousy.

Simmons then sends a message via Flex Screen to S.H.I.E.L.D..

Bobbi Morse, head of security, and Bakshi discover there is a mole in the facility. Morse interrogates Simmons as Turgeon is dragged off, since a Flex Screen was found in his desk.

Meanwhile, as Phil Coulson scribbles the Words of Creation into his desk, the field agents enter, wondering what to do about the wedding incident. Skye questioned Coulson's orders after seeing the scribbling until he presses her and makes her run out.

As she was researching the Words, Lance Hunter tells Skye to consult Grant Ward. Ward desperately hopes that Skye was not carving the Words, telling her that John Garrett did it more and more after his infusion with GH.325. Skye refuses to listen to Ward when he tells her that Raina was his sourse on information, pertaining to her father.

Raina begs Calvin Zabo to let her borrow the Obelisk, but he refuses and tells her to beg Whitehall for her life. Going to HYDRA Laboratories, Raina sees Simmons and photographes her sending her message to S.H.I.E.L.D., calling Coulson for a meeting.

At a restaurant, Coulson meets with Raina to find out what she wants, with Hunter, Skye, and Melinda May listening. She tells Coulson that she wants to take Skye to her father, otherwise she will blow Simmons' cover. Coulson refuses her offer and the file is sent. Raina is stunned. Hunter tags her and allows her to leave after she reveals Zabo's location.

With the file sent, all eyes are on Simmons. Bakshi sends a security team to retrieve her. When Morse comes with her team, Simmons is trapped. Morse then pulls out her battle staves and fights the agentsm revealing that she is an undercover S.H.I.E.L.D. agent. The two are pursued to the roof where they jump onto the awaiting cloaked Quinjet, piloted by Antoine Triplett.

Skye goes solo to Zabo's hideout and finds his picture before Coulson and the others catch her. When she sees the bodies of two of his patients on the floor, Skye calls him a monster. This upsets Zabo as he watches with cameras from his car nearby.

Coulson greets Morse, Simmons, and Triplett when they arrived at the Playground. Leo Fitz is hesitant in greeting Simmons; Alphonso Mackenzie is happy to see Morse. When Hunter sees Morse, he is upset that Coulson has him working with his ex-wife. Skye wants full disclosure from Coulson and he decides to give it. He tells her about his carvings and Skye reveals that the Words of Creation are a map.

Zabo takes the Diviner, as it's called in its native language, to Whitehall and offers to teach him not only how to use its power but how to survive it. When his motives were questioned, The Doctor said that they had a common enemy: Phil Coulson. 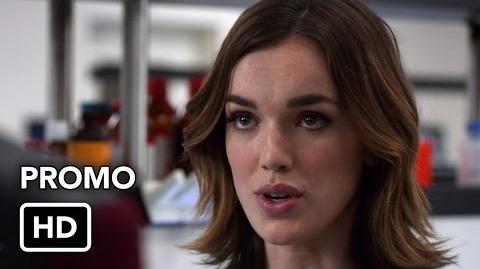 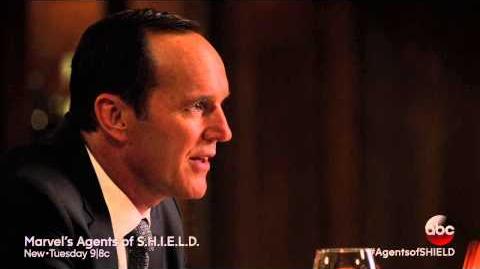 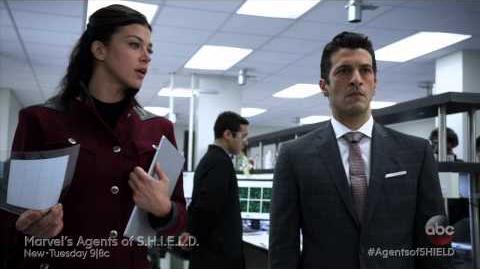 The Marvel Cinematic Universe Wiki has a collection of images and media related to A Hen in the Wolf House.