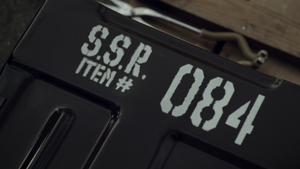 "And an 0-8-4 is?"
"Object of unknown origin. Kind of like you. Team goes in, determines if it's useful or poses a threat. Last one turned out to be pretty interesting."
"What was the last one?"
"A hammer."
―Skye and Phil Coulson[src]

An 0-8-4 is a term used by S.H.I.E.L.D. to denote an object of unknown origin. Depending on the situation, either a small or large group of agents are sent to determine what the 0-8-4 is, and how it could be used.[1]

The code "0-8-4" derives from the identification number used on the case containing the first object of unknown origin, as it was the eighty-fourth item catalogued. The object was a Diviner obtained by the Strategic Scientific Reserve, the precursor of S.H.I.E.L.D., during the raid of the HYDRA Research Facility in Austria in 1945.[2]

Leo Fitz explained to Skye that he had never experienced an 0-8-4 being a person, though it was possible. He elaborated by saying that he has read about weapons, spacecrafts, and energy sources labeled as 0-8-4s, citing that the only characteristic they had in common is that all were dangerous.[3]

Peruvian 0-8-4
Add a photo to this gallery

Retrieved from "https://marvelcinematicuniverse.fandom.com/wiki/0-8-4_(Code)?oldid=1159974"
Community content is available under CC-BY-SA unless otherwise noted.